“Got a lovely bit o’ curly kale for you.” 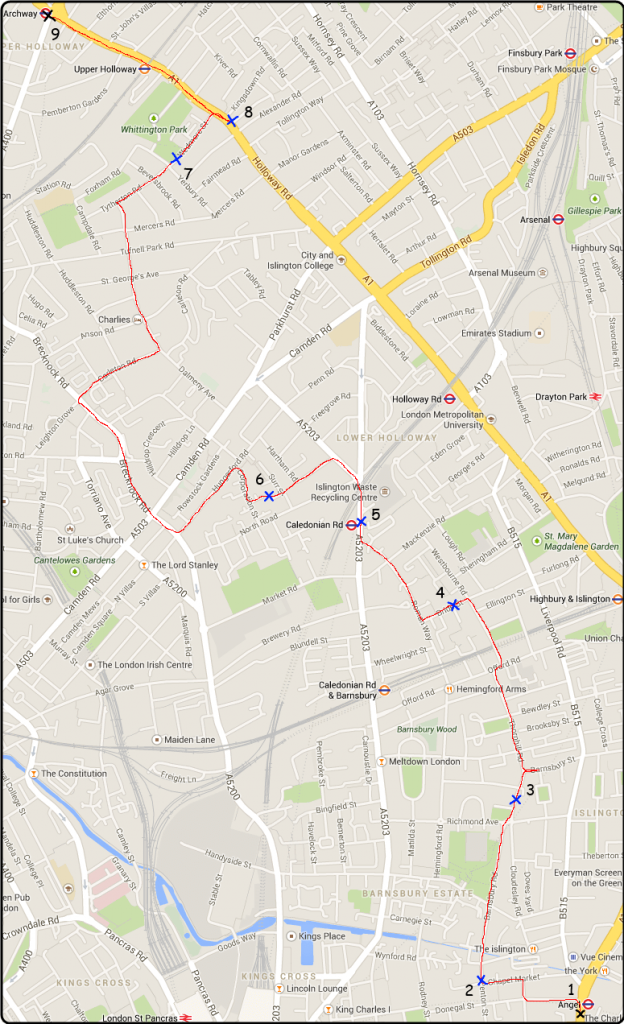 When I wrote up a previous walk, I erroneously stated that Barnsbury is the place with which my internal compass has the most difficultly, at least north of the Thames. Lies: it’s Farringdon. Show me a million maps with intricate markings of precisely at which point Cowcross Street crosses Saffron Hill and I’ll still be tripping over a bollard at Smithfield Market before you can say ‘Not that way you blithering cretin’.

Nevertheless, Barnsbury comes a close second when I fancy getting turned around by geography, as though the world is made of wormholes. Resolving to repair this ludicrous mental affliction I set off on a walk from Angel to Archway, cutting across the region once home to Walter Sickert, who may or may not have killed a number of people some years ago, and Tony Blair, who may have killed a number of people somewhat more recently.

I have been in Angel for a meeting with a German named Markus, a chap with a curious air of absence about him, and a young woman whose name escapes me who seems to ‘like’ an awful lot of things, going by the frequency she uses the word. Accompanying her on the 130 metres or so from the top of City Road to the Vue cinema is a horrifying experience in purified gobshitery, cut off halfway as I make excuses above her astounding din and peel off desperately into White Lion Street.

The Fallen Angel pub, which for some reason I’ve never been in, has fallen, stuffed with the usual array of sheets and workmen presumably gastro-ing the holy hell out of it. I’m not yet in Barnsbury and already its famous array of dead pubs rise up in my mind like the army of darkness.

At the end of the fabulously grim Chapel Market is a pub named the Joker of Penton Street, which I went in once under a previous guise. The pub’s previous guise that is, not mine, though I’ve had a few – as has a man sitting on a bench outside, wearing an implausible multi-coloured bobble hat. At precisely the moment I walk by he slumps slowly to the side, his head connecting with the bench with the most pleasing bonk I’ve likely ever heard. He lets out a piteous moan and slumps to the ground clutching his throbbing dome as I thank the stars I had only water with lunch, as anything more substantial and I’d surely have pissed myself. 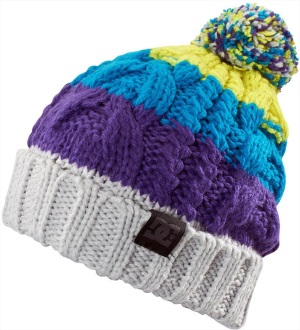 Greatly enjoying my aching sides I continue into Barnsbury Road, and past Barnard Park, containing what looks like one of the most fun adventure playgrounds I’ve seen in London. We never had parks like that when I was a kid. I’m half tempted to have a swing on that vast collection of health-and-safety-be-damned ropes, as is my due.

I pass a dog that resembles a punched horse, before stumbling upon a splendid find – a pub I’ve never seen or been in, with a cheery barmaid and excellent garden in which I slot home a fine pint of ale. The garden that is, oh do behave. I will be back, if only to experience this garden without four shrieking Americans trying to out-‘like’ each other in what is turning into the North London Like Olympics 2014. It happens to be Valentine’s Day and these people are shooting the word at me like the bullets of Capone’s henchmen exactly 85 years ago.

I leave The Albion and bump almost immediately into the Drapers Arms; I can’t remember it, but seconds in its damnable mediocrity comes flooding back. Still, one while I’m here can’t hurt, though there’s almost pain involved for someone when I sit down next to yet another Yank doing yet more liking.

A quick, sharp exit, past the evocatively named Ripplevale Grove. I spy a packet of Cutters Choice on the floor. My shag of choice, as a youth. I quit when I was 20 and that’s becoming depressingly close to half my age ago. I feel ill. Call the doctors.

One of the concerns of the increasingly infirm is a certain insolidity of bowel that can hit with the suddenness of a Klitschko upper cut. It is with the unwelcome image of an elderly relative in woods near Hampstead Heath just a few weeks earlier, signalling with a terrifying wink that he’s off to use a few leaves quite disgracefully, that I resolve to ignore the siren call of the sit-down khazi and force myself on.

I pass a building with a plaque that I now know is quite common across the city, for the ‘East End Dwellings Company Limited’, dated 1902. A proper company name, that, proudly elevated above the drivel they come up with today: Centrica, E.ON, Consignia before they saw the light then sold their soul. Nearby in the peaceful surrounds of Thornhill Road I see the world’s coolest lollipop man, high-fiving kids while somehow managing to both stop them being run over and not come across like a molester.

The children of Thornhill Primary would do well to turn right towards Barnard Park as they leave, not left, as Arundel Park Gardens demonstrates how not to do an adventure playground. There seems to be a small child in a cage, halfway up a tree, just sitting there. There are no other activities around, just this child in his cage. I can see no entrance to nor exit from the cage. He does seems fairly content though, king of a castle deserted by subjects.

My previous assertion that the Two Brewers is likely to be London’s scariest pub is challenged by its nearby counterpart the Jolly Sisters, also near Pentonville nick. Perhaps they’re both lovely establishments crying out for new blood. Yes, quite.

I pass a tramp by Caledonian Road tube station who bears a striking resemblance to the currently arraigned Dave Lee Travis, and then a copper perhaps coming to feel his collar. A boy, in full police uniform, strides confidently through the Hyde Village estate, home to a shortcut on my route. He can be no more than eight or nine years old, this chap, but he’s already aiming high – he’s dressed like a senior police officer, a chief constable perhaps, rather than a bobby – and one can only commend his ambition.

The two ever-filling waste sacks at the lower end of me are now suggesting one at least should be emptied to avert disaster. I bow into the Leighton Arms to enjoy both a long leak and an amusing conversation among a selection of inebriant-lovers at the bar. Comedy writers could do worse than sit in pubs all day long for material and I’m wasting none of it on you ungrateful lot here (we know, they cry).

I am a man at a crossroads, three pints in, keen for more but not wanting to risk over-confidence, for that way lie jolly, possibly murderous sisters. I aim gradually back towards Archway, having altered the destination to Tufnell Park somewhere around the time the back end started giving me gip. Archway via pubs is the compromise.

I enter the Good Intent to be met by a massive black dog, which almost causes a cataclysm at the aforementioned back end. Three minutes later the same dog is nuzzling my leg in friendly fashion. I can think of no better creature to terrify those not emboldened by ale and to welcome those willing to give this mildly intimidating pub a go. 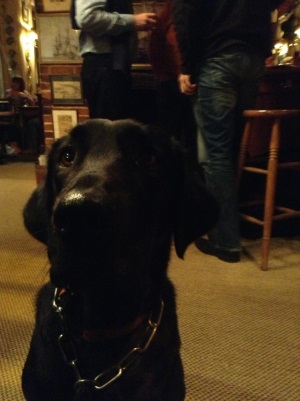 Talking of which I’m reminded I’ve never been in The Crown on Holloway Road. It is, in fact, the last pub near Archway that I’ve never been in, so despite its grotty exterior and frosted KEEP OUT-style windows, I’m doing it. Two old men sit calling out answers to The Chaser on the TV. A young chap comes in selling some type of greenery from under his jacket, broccoli or cabbage or similar, like Jake the Poacher from Withnail & I. And The Crown is just a pub after all, which disappoints me a bit if I’m honest.

The bladder of course demands one final pit-stop, in the Floirin. Its clientele comprises three normal-looking English people sitting at a table with…that’s a brass, surely. It’s reggae night tonight. I don’t stay.

What is now clear as I stumble the remaining distance to the Northern line is I am becoming, have become, a man whose life is one great vicious circle of remarkable circumference. I walk, I drink, I require relief where only pubs offer it now all the public conveniences are shut, so I drink, and I walk, and relief is earned thusly. Such afternoons afford a doom-laden glimpse into my future, where I stumble from pub to pub, drinking and pissing and drinking and pissing, to ultimately end up either a berk in a bobble hat bonking his bonce or a tramp who looks like DLT.

I pray you to bear me witness that I meet my fate like a brave man.

The soundtrack to this walk was False Hope Syndrome by Teenage Daydreams.