“I want my country back.” 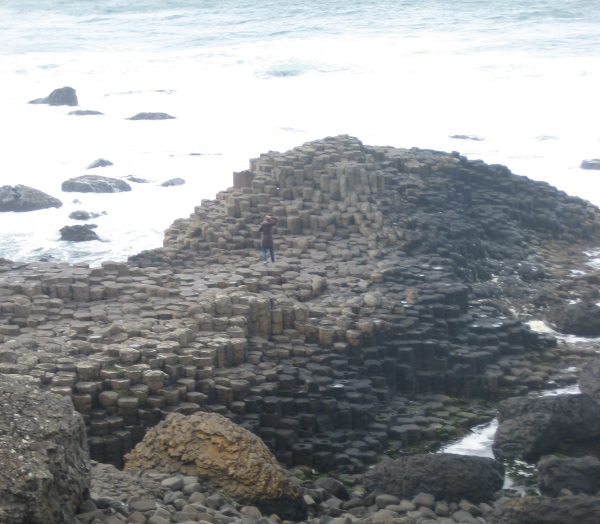 Whenever Northern Ireland is mentioned, in conversation or in the media, people of a certain age have their minds filled with very specific and wholly unwelcome imagery. Guns, bombs, men in masks, funerals, marching, sorrow. It’s the same old theme since 1916, as a rubbish band from the ’90s once correctly warbled.

As I write this, the province is in the midst of the frankly amazing ‘Marching Season’, during which grown men on two sides of a fearsome argument over sovereignty and citizenship stride down streets in a blatant attempt to wind up the other lot. Each march takes place because a certain section of society cares a lot more for their own version of history than any attempt at forging the shared future this beautiful part of the world could so easily flourish within.

My opinion, clearly, and I’m not from Northern Ireland. But it’s clear on a visit to the city there are a huge number of people, perhaps the majority, who also yearn for a break from the past. I have no vested interest and can see both sides of the each argument in an equally pointless light – the difference between my view and the view of those in and around Belfast is that they often care greatly for their own views of the past, but care enough about humanity to understand it’s simply time to move on.

It’s not a standard holiday destination, Belfast. Eyebrows are raised as friends and family are told, the eyes beneath those brows betraying thoughts of munitions, plastic explosives and coffins carried through streets lined with mourners and the military. The city can never escape – our visit in early 2011 coincided with a period of relative calm, and though the locals were plainly enjoying it and making the most of it, the sense of them clinging on vainly until the next set of marches was palpable.

That mixture of hope and apprehension was best manifested in the guide accompanying us on one of the ever-underrated red hop-on, hop-off buses that surprisingly tour even the more dangerous parts of Belfast. The guide, a silver-haired man in at least his seventh decade, spoke lovingly of his home town but could never escape telling us of some atrocity at this crossroads or who was buried in that cemetery. 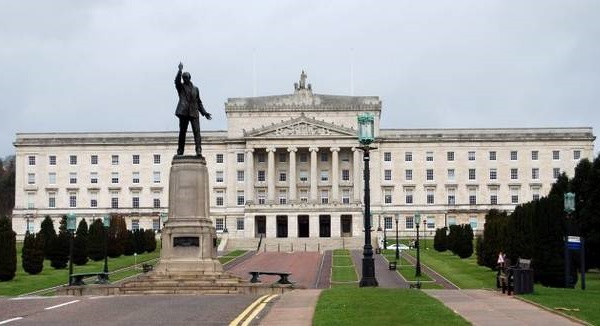 As his words touched on the Troubles, his voice became brutal, angry, paying no heed to who may be able to listen to this should they wish – crucially, dismissive of both unionists and republicans and their obsession with looking backwards. The future can only be shared or there will be no future at all; such has been clear for 40 years or more.

We took the tourist bus as fine drizzle was penetrating our souls all weekend, but had we followed our standard plan of walking as much as possible we would have missed many of the incredible sights this city’s history has forced upon it. Never in my wildest nightmares did I think I would ever visit places with evocative names such as Falls Road and Shankhill Road. And had I ever considered it I would have assumed in some vague way that great harm would befall me there – our guide confirmed in years gone by that that fear would have been well placed.

One tale involved a specific crossroads, no more than half a mile from the centre of Belfast – in a certain type of car, looking a certain way, having been seen with certain people perhaps, to turn left at this crossroads could end in ambush and death at the hands of one particular faction. To turn right could spell doom from the opposing group. The guide never mentioned what would happen if you went straight on but the implication wasn’t positive. 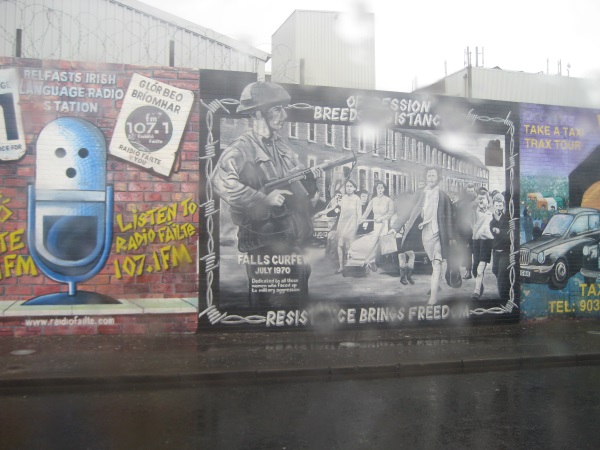 Then there are the famous murals. Huge pictures of men in masks with enormous rifles, wishing death on another faction or religious group – religion never being far from the debate, of course, which is perhaps why I can have no truck with it. As works of art they are remarkable. As something to have to live nearby they are mind-boggling in their insensitivity. Get the kids involved early must be the theory. Tell no child about any of this before they’re 15, and when you do then tell them you’ll be looked at with incredulous disdain. Much like religion, fittingly.

Elsewhere Belfast contains huge, 20-foot-high walls to divide its people, to keep them safe. Unlike the murals, which are the subject of genuine debate, the walls are seen as permanent fixtures by most people, who see them as a sensible way to retain the order hard-won by the peace process.

The bus tour also included a zip through the grounds of Stormont, which I can’t personally look at without the memory of Michael Stone being manhandled to the ground a few years ago during his bungled attempt at killing the Sinn Fein leadership. He looked red faced, likely with effort and anger although embarrassment should have been his emotion, at his crap attempt at multiple murder as much as for his disgusting long-term goals.

There are certainly signs of growth, particularly in the port area where the city’s two enormous cranes, named Samson and Goliath, tower over Belfast Lough. The Titanic Quarter was being lavishly regenerated at the time of our visit, in preparation for the 100th anniversary of that vessel’s demise (it was built on Queen’s Island at Belfast harbour, beginning the city’s slightly unusual obsession with the doomed ocean liner).

The centre is nothing to write home about, resembling as it does a common-or-garden British or Irish city. But then why would you spend a large amount of money on your city when it may at some point be forcibly rearranged in a moment of madness? Each day we walked past the Europa Hotel, devastated by a bomb in 1993 right in the centre of town.

There are of course many other things to see outside of Belfast. A day trip around such sights as the Giant’s Causeway, the Carrick-a-Rede Rope Bridge and the Old Bushmills Distillery happened to coincide with a windy but bright day. It showcased this part of the world as truly breathtaking in parts – I like a view, but the waves crashing into the stepping stones of the Causeway were quite some sight. That said, the rope bridge was a tad trouser-browning. 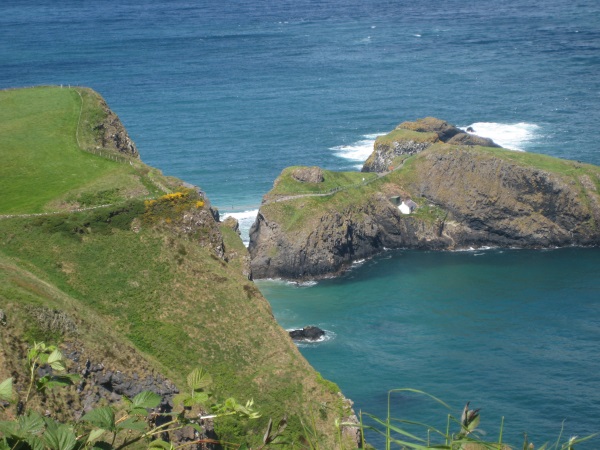 I can honestly say, in no small part due to the forthright positivity of the bus tour chap, that I liked Belfast a great deal as a city and so very much want it to move onwards and upwards. If Northern Ireland can ever truly shake off the idiocy of some of its citizens, who are fighting a war they can never win instead of pursuing a peace that’s there for the taking, Belfast will become the shining European city it deserves to be. With the area’s natural beauty the tourists will flock in. Even in 2013, with tensions heightened again, the voices clamouring for peace are louder, bolder, clearer. Listen to them, shut out the hate, give Belfast a chance.