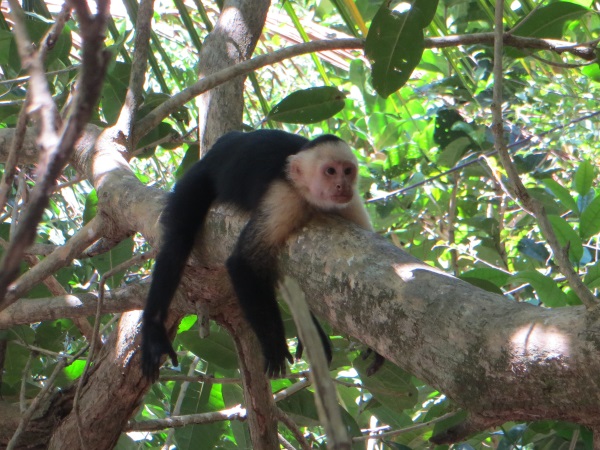 You go to Costa Rica for the wildlife. So, straight down to business.

During a fortnight in Costa Rica, we saw all of that. Quite the bounty.

But the data’s incomplete. For example: four toucans, in the land of toucans. This is not enough toucans. 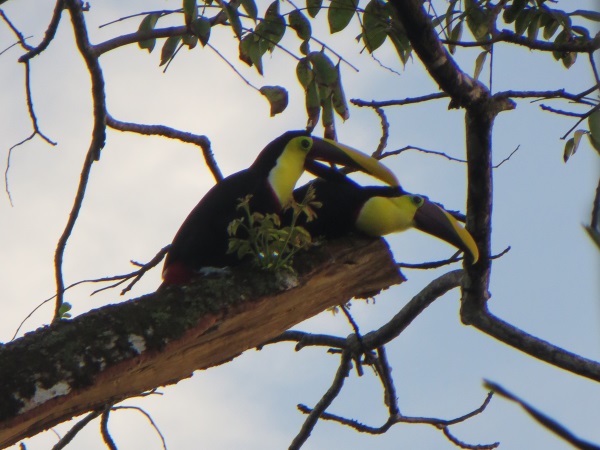 Two of them were at it, actually, up a tree in the first of our ports of call: Tortuguero, on the Caribbean coast. You can only reach the area by boat, and along the way the driver/spotter team eyed up what they claimed was a crocodile, about 30 metres away, looking suspiciously log-like. Along with any form of (scary, non-Koala) bear, the crocodile was one of the last two creatures on my ‘must see wild’ list. And here was a crocodile, on day one! Shut up that is a crocodile too, logs don’t have eyes yes I can tell they’re eyes from this distance oh I said shut up.

Two weeks in Costa Rica, in five locations across the country, with a goal to see as many creepies, crawlies, climbees and critters as possible. And the sights of this country were remarkable. But it’s the sounds that live with you.

On our penultimate day, we did a short guided tour in a bid to see a few more of the blasted creatures who’d been hiding from us for a fortnight. Again we saw little, barring a couple of boars our guide got a bit energetic about. You can find them in Hampshire mate, calm yourself.

But then, as it started to belt it down with rain, the noise. Sweet suffering Christ, the noise, from the very depths of hell. The sound of an F1 car changing down gears for a hairpin in the Hades Grand Prix. Howler monkeys. Alouatta aaaarghwhatthebloodyhellisthat, to give them their scientific name. They were right above us, and the only word to describe their spine-chilling racket is monstrous. Under the circumstances, we loved it.

The howlers are what woke us at 4.48am on our first night in a room without walls, curtains or anything more than a bit of mesh to keep the bugs out. They were joined soon after by ear-piercing toucans, sounding like an already angry man getting one caught in the zip. Lizards bark like dogs, locusts whine like generators and frogs actually whistle somehow. And almost all the time every one of these little sods refused to show itself to the deafened, camera-wielding ape.

It’s a land of many trees, verdant and lush thanks to the abundant rains for many months of the year. We heard, as we have in many places in the last few years, that climate change is amending established weather cycles and making dry what once was wet. But here there’s still enough rain to float the arks they’ll need to keep their various pairs of creatures above the water, such as the monogamous mackaws that screech across the sky like bickering old couples on their way to the bingo.

Those very trees are the key to the visual dilemma. Day after day the squarks and howls of birds and beasts would have us whipping our necks left and right. But trees, always trees. The greenery is so dense, you can be 10 metres from a family of monkeys and not know it, unless they hurl themselves from one branch to another.

Which they do a lot, and ohoho, that’s brilliant. When you can see what they’re up to, monkeys are just great. That’s all I’m telling you; go find your own. 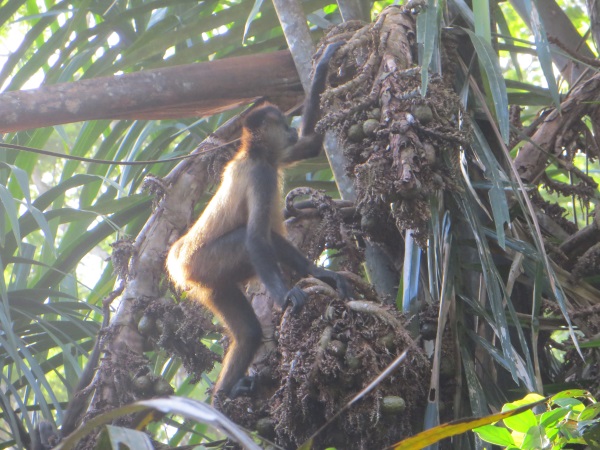 Those same trees did provide perspective. After the first few days, when we’d begun to realise there wouldn’t be so many hummingbirds about they’d be carrying us to lunch like a living Sedan chair, we came to appreciate the Costa Rican environment itself. My first truly delighted moment came on a hike up a hill in Bajos del Toro, cold and splattered by driving drizzle, with not so much as a dickie bird about. Tramping on dodgy forest paths at San Gerardo de Dota was exercise made fun, if you can imagine such a thing in the terrifying age of the treadmill.

There are many walks to be had here, often steeply up and down in forests and jungles. At one point we found ourselves navigating back and forth across a stream, looking for a waterfall, on the Osa Peninsula. We were in an isolated section of a jungle in Costa Rica, surrounded by whatever creatures wanted to do their worst, nobody knew where we were, and it was lost on neither of us. And it was just brilliant.

Mind you, there’s hazards all right. We did a night-time tour of a nature reserve in Manuel Antonio. Our guide brought his 11-year-old daughter with him; it was the first time Papi had taken her along and she proceeded to identify as much wildlife as him, if not more. But not even the redoubtable Sophia was prepared for the torch to alight on the first of the four tarantulas we encountered that night. 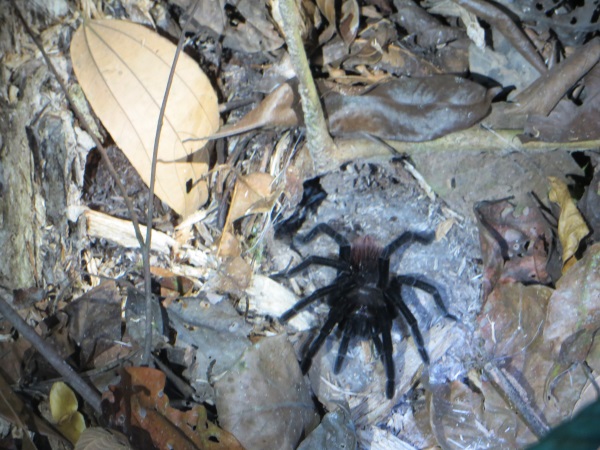 Tarantulas. Wild. In a jungle. At night. Right bloody there.

Thankfully the 40-odd crocodiles were a bit further away. On the road to Manuel Antonio there’s a bridge over the Tarcoles River where crocodiles congregate, apparently for tourists to gawp at. You wonder why, until a man appears and throws meat in and they writh about like they’re just downstream from Indy’s Temple of Doom. Still, crocodiles, in the wild. Tick that box, son, and away to Vancouver with you. 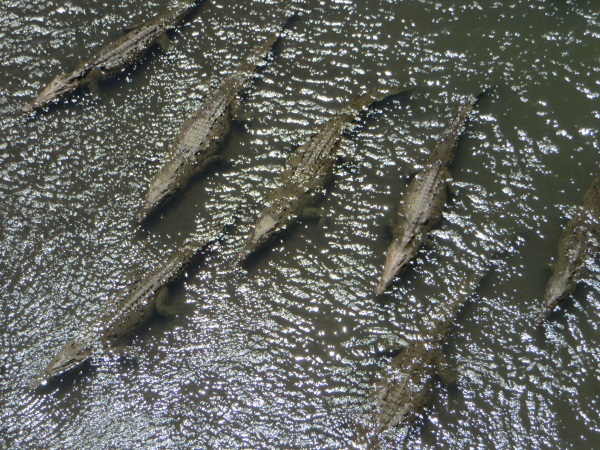 Our journeys across the country were handled principally by an excellent driver named Darwin, who taught us many things about his country. People still generally live with their parents until they marry, and still go to church. Crime is slowly getting worse in the capital, San Jose, but the tally of homeless people on that city’s streets is ‘about eight’. Our single night there hinted at a calm enough place with a horrific traffic problem, with fleets of huge commuter buses clogging up a disastrous one-way system.

We also found out that Costa Rica has become the world’s leading exporter of pineapples. (Second place goes to Belgium, somehow, so scepticism is allowed.) Thing is, pineapples are not native to Central America, and the land has to be wracked with chemicals and pesticides to make them grow, which has grim effects on the ecosystem. Same is true for bananas, and worst of all the palm trees grown industrially in huge numbers for their oil. Costa Ricans are currently trying to work out where the line between agricultural and tourism profit lies. Let’s hope they judge it right, but so far, looking at the countless dull grids of palms from a light aircraft on the first leg of our journey home, it’s not looking great. 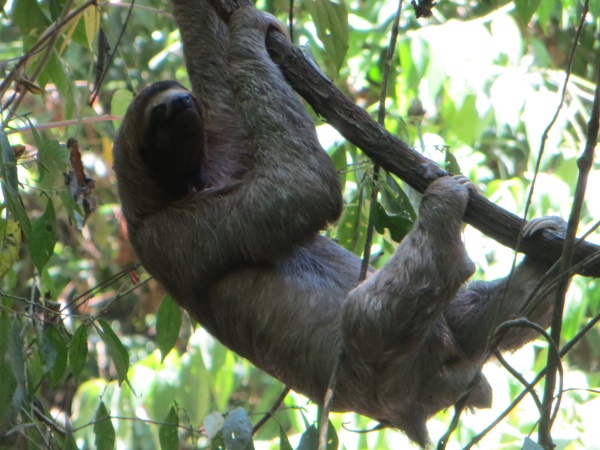 Strangely, one thing you don’t see growing a lot is beans. Oh God, the beans. An all-pervading menace contaminating every Costa Rican meal, you think you’d be safe with a plate of sunny-side up on toast smothered with spicy tomatoes, only to find they’d somehow smeared some kind of black bean paste on the underside of the eggs.

By Christ, the food is diabolical, and this is coming from an Englishman. It was epitomised by the ‘traditional Tico breakfast’ (Tico being how Costa Ricans refer to themselves). This was two fried eggs, a slab of Dairylea-like ‘cheese’, plantain, a small pancake containing unspecified vegetable matter, a pot of sour cream, some pineapple and the ubiquitous ‘gallo pinto’ (rice and beans). I stared at it. Went for it. Stared at it some more. Left hungry. 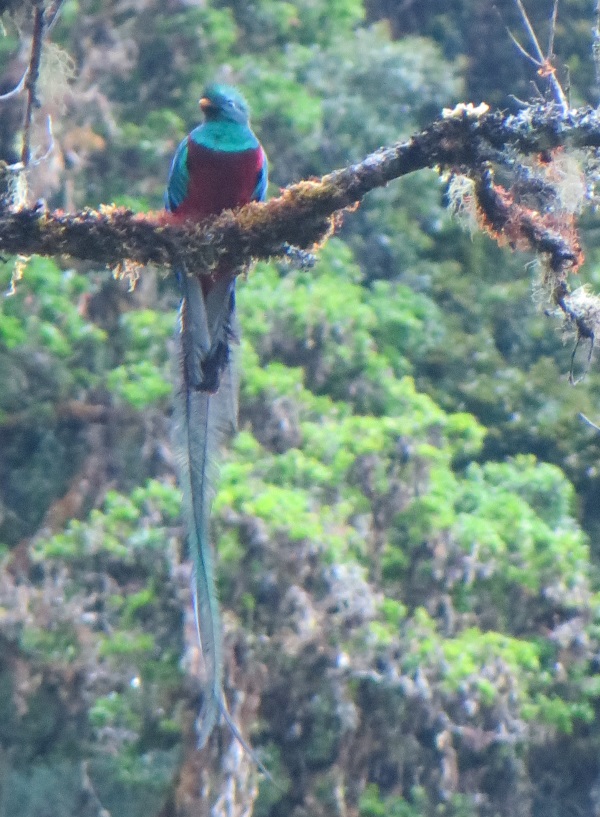 That said, I must commend the national beverage: Imperial. In the implausible alternate universe where I fight for sobriety in the war of temperance, lager would be first up against the wall as for the most part it’s hateful pish, but Imperial hit the spot more than once.

As did Costa Rica as a whole. This was unlike other trips in that we weren’t sure what to expect before we went, and weren’t entirely sure what we’d had by the end of it. But we knew this had been an excellent place to visit.

It’s a lovely, natural landscape. More than once the thought came into my mind that the scene I was looking at, be it the tops of thousands of trees from a hillside road or a beautiful waterfall in a forest glen, must have looked exactly like this for millions upon millions of years. There’s a simple peace in realising that, like looking at the stars. 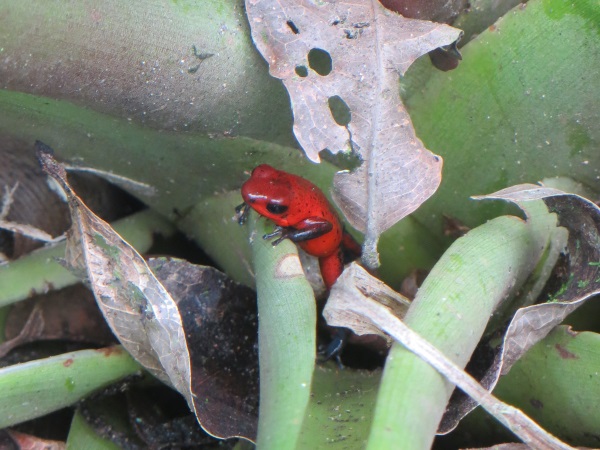 Add the bounty of creatures hiding themselves behind every bush, and this becomes one of the most relaxing destinations you could hope to visit. And I hope it resists the lure of industrial capitalism and stays that way, though there’s a tough road ahead. We would do well to let it stay the Land Before Time. We don’t have to milk the entire planet for every last resource. We don’t as a species need more more more all the damn time.

This is a big planet and we’ve got plenty of places humanity can mess with already. Let’s try to leave Costa Rica to the birds and the beasts playing the world’s biggest ever game of hide and seek.

« Jitterless in Japan | Perplexed in Paddington »