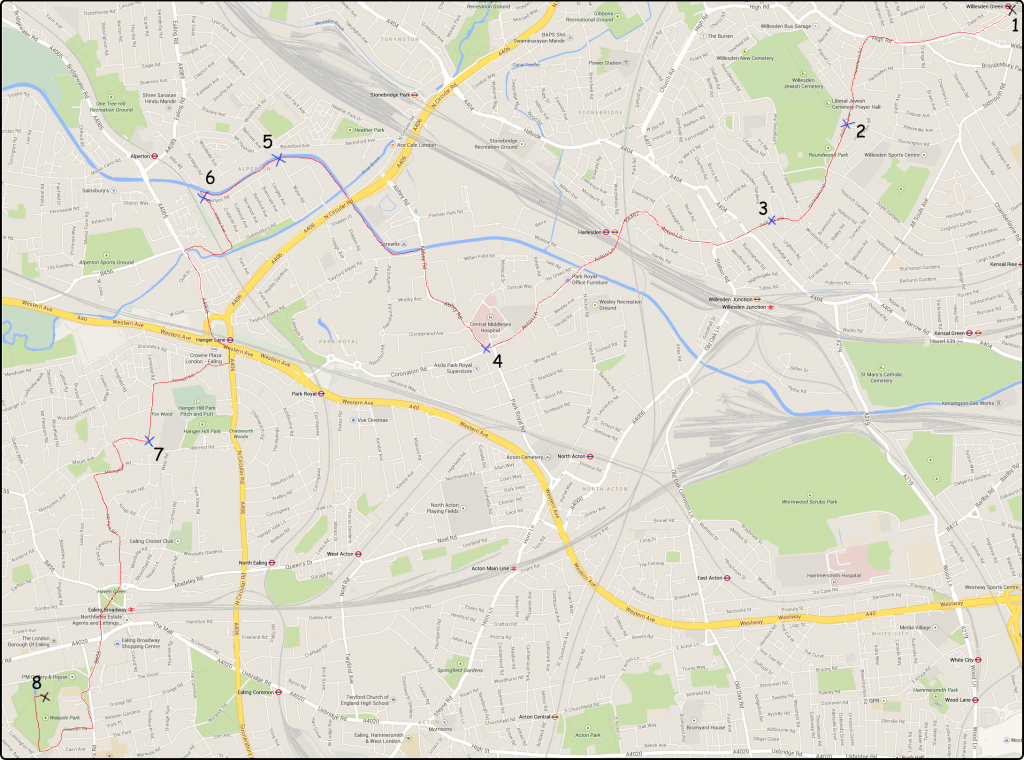 Following a recent excursion into the terrifying territory of east London, the mind turns to where else might make the trousers brown in our fair city. Harlesden is one such area, regularly named in lists of the most effortlessly frightening locales on either side of the Thames. Thus, emboldened by not being killed in what turned out to be no worse than south Hoxton, Harlesden it is.

I can’t simply wander into Harlesden and ask a local criminal to assault me – I prefer the hunter to work for his prey, so I need a reason to walk through this crook-infested disaster zone. Ealing has a beer festival today, Harlesden separates me from it, I allow little to stand between me and power juice so it’s with row upon row of questionable barrels of real ale in mind that I step off a bus at Willesden Green for a long march to the south and west.

It immediately strikes me that this part of London is a lot greener and cleaner than its reputation would suggest. It is, it transpires, some sort of conservation area, but my mind has it as a land of car lots populated by Arthur Daley’s motors and small-time villains on the hunt for a nice little earner. There are a number of strange looking blue garages at the end of Walm Lane, but they seem to have been co-opted by an army of flower sellers and textile fiddlers rather than Ray Winstone’s Arnie pissing about with someone’s perfectly healthy head gasket. 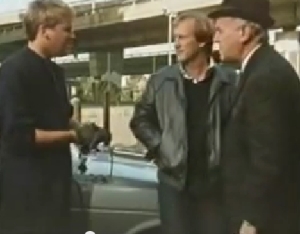 An area is made by its pubs and Willesden has a fair collection of almost uniformly Irish ones, including Angie’s III, which looks like ‘Angie’s ill’ to a man whose laser eye surgery clearly wasn’t for life. Perhaps Angie has been made unwell by the Costa coffee shop that’s plainly moved into what used to be a beautiful old, red-brick boozer. Costa seem more guilty of swallowing pubs than most and I will never enter one without munitions of some variety.

I turn left, and stride smartly past Strode Road. I pass four elderly West Indians having a heated discussion about the World Cup and a skinny man dragging two enormous suitcases behind him. One corpse at a time, son, you’ll do your back a mischief.

I’m nearly killed by an ice cream van at the end of Hawthorn Road and I spy palm trees outside the fire station across the way – twin events that prove someone is goading me with today’s weather that’s hotter than the fourth or fifth Circle of Hell. Thoughts turn to a tipple, but it’s too soon, too soon. I’m approached along Robson Avenue by an old woman with a walking stick. I smile a wordless hello. She looks horrified and strikes me with her stick as she passes by. Stunned, I turn to see the toothless crone laughing heartily and I can’t help but grin back at the madness of things.

Eventually, after a long stretch where I spy far more Brazilian flags that you’d expect in a place like this, I’m in Harlesden. It’s disappointingly unfrightening, though it could do with a lick of paint and it’s not without oddities. What looks suspiciously like an escape mattress sits in the front garden of St Joseph’s Court, while a dreadful art installation entitled ‘City Challenge, Art in the City 1995’ reminds me that all sculptors are comedians, just better paid. Loud, upbeat reggae emerges appealingly from the Jam Down Bakery and I force myself on despite the magnet in the Royal Oak pub tugging at my inner steel.

After a surprisingly pleasant stretch of Acton Lane I pass an unmarked barber’s shop. Inside a man in a mask lowers the ears of a rigid punter who may well have been strapped down. Nearby I hear furious shouting from what seems to be a primary school. Finally, the real Harlesden. 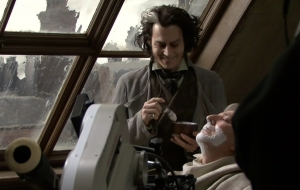 I find myself at Harlesden station but immediately there’s a sign for Park Royal, which in my mind is an indistinct, boring stretch of town. A large power station alerts me to its ‘danger of death’ and if I’m going to die I might as well die happy, so it’s time for a pint in the nearby Grand Junction Arms. Nothing to report within but for a large number of Australians without a closed shoe between them.

There’s so little to say about Park Royal I’m reduced to the words “stuff’s just there”. In the glass front of a boxing and fitness shop I see a confused man looking downwards, his hand making a slow wanking motion but before I can consider its implications there’s a canal. In my mind I have the map of a route I plan to take to Ealing. The map says I should have gone over two mini roundabouts by this point and I’ve only crossed one, but the canal surely goes south and a nice waterside walk would be lovely.

There’s further danger of death here. The narrow towpath is populated mostly by cretins on bicycles going at unimaginable velocity, their too-close-behind bells giving me under a second to decide to leap left into the nettles or right into the water. I press on and find to my surprise that the canal goes over a major road. I’m not sure I’ve ever seen a canal go over a dual carriageway in such a fashion and it fascinates me for a number of minutes, I’m not ashamed to admit.

I reach a possible exit from the water’s edge and wonder if this is the point I should turn right to head west again. The canal wasn’t on my planned route, so I must turn to the electronics to see if this is wise.

The canal goes west, not south. I’m somewhere called Alperton that I know only from the tube map as somewhere far, far away. I’ve gone way off course, and I’ve no idea how. Had I gone right at this bridge, I would have been going north.

I am suddenly tired beyond measure, a headache leaps out from behind a bush and I’m still miles from my goal. The beer festival seems so far from me I feel like drinking from the canal on the off-chance someone got drunk and pissed in it.

I slowly come to terms with my situation and plot a new course. Following its recent squash-induced explosion my left calf muscle starts to twitch at the thought of extra miles. Off at the next exit, into Hazel Grove, where a Union flag flies proudly. Isn’t it usually all about England flags when someone demands their right to patriotism? One last fling before Scotland bids farewell, perhaps.

My new course takes me past a bone-dry River Brent and beneath the hateful Hangar Lane junction. I flirt with getting the tube to Ealing, but deep down I know I must pay for my errancy. Right into Brunswick Road, Sandall Road, Birkdale Road. My mental route takes me right but a sign points left to Ealing Broadway. I will not be fooled again west London – right it is and on into Mount Avenue, Helena Road, Montpelier Road. I notice a dead magpie in a bush. No wounds, just dead. Perhaps it too tried the Long Walk to Ealing. Mandela had it easy.

Mount Park Road all the way to Haven Green, and finally to Walpole Park. In a cruel final twist I take the entrance to be on the east of the park and have to walk an extra half mile to get in via Lammas Park Gardens while Ealing points and laughs.

Finally, regretting my trouser choice as they rub my inside leg to shreds, I am at a beer festival. I pictured Harlesden as packed with terrors and it was a lowly canal that finally laid me low. I’m so dehydrated it will be a full seven hours between my most recent leak and my first at the festival. The majestic rows of barrels beckon me on to eventual doom. The first pint is nasty and I simply don’t care.

Map key
1. It’s actually quite nice around here.
2. Argh! A crazy old hag!
3. Escape Mattress ™
4. Things..begin…to go…wrong…
5. I have no idea where Alperton is but I know I don’t want to be there
6. UKIP alert
7. Ealing’s final attempt to con me off-route
8. A disgusting, sensational pint

The soundtrack to this walk was You’re Gonna Miss It All by Modern Baseball.