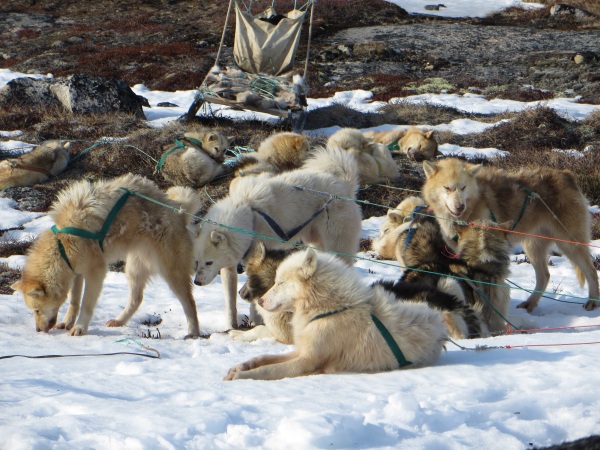 Should the mayor of Ilulissat commission a sign at its borders welcoming visitors to the neighbourhood, it may well read:

Welcome to Ilulissat, the city of icebergs
Population: 9,500

This would be notable for three reasons. Firstly, the people of Ilulissat are proud of their icebergs – the name of the town is Greenlandic for ‘iceberg’, and there are massive icebergs as far as the eye can see if you look out into the northern Atlantic. Apparently the iceberg that brought down the Titanic originally came from the Ilulissat icefjord, although whether the residents are proud of that particular water-based weapon is hard to judge.

Secondly, the sign lies. The word ‘city’ gives Ilulissat a gravitas that its scattered, ramshackle and vividly multicoloured structures do not deserve, yet the residents do indeed upgrade themselves from a town whenever possible.

The third reason the mayor’s sign may raise an eyebrow is the population figure. As every tour guide will tell you, and every hotel staff member you talk to at any length, and likely any Inuit not half-cut from imported booze for the eighth straight day, more than half of that population is made up of dogs. If the city (damn, fell for it) does indeed have a mayor, it would only be right if he or she were a Greenland Husky.

Huge sections of the town are given over to these dogs, which are almost half-heartedly tied to rocks when not engaged in pulling a fat man across a mountain. For one of the most interesting and yet bizarre experiences you can have in the wilds of western Greenland is dog sledding, and it seemed rude not to have a go. 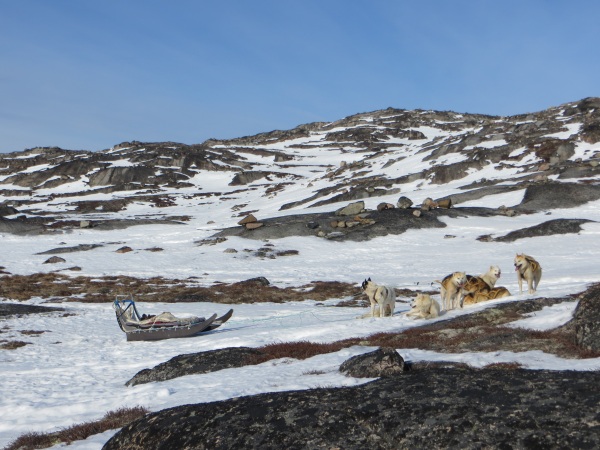 We were given rapid instruction on how to get on and off the sled, which was to be pulled by eight to ten dogs and escorted by an Inuit, called Jan in my case. Having seen a few Inuit names written down, I’ve a feeling he spared me his actual name for fear of melting my wits before his dogs tore off on the rocky, snow-free ground preceding the white hills in the distance.

Like Iceland, Greenland is made up largely of volcanic rock but in March you wouldn’t normally know it, as the snow is usually a few feet deep at that time of year. Jan and a number of locals were at pains to point out that their way of life is changing year on year due, in their view, to climate change. The ice has receded from the bay, the snow has melted earlier in the year, and the cruel irony is that it must partly be due to the likes of me jetting in to see the place. The money they get from tourism is helping to kill their livelihood and the answer to it all lies in faraway places the Inuits will never see, such as Washington and Beijing.

The upshot of this lack of snow was that I up-shot, sailing off the sled at an uphill left turn, and was forced to scramble to catch the sled up as it sped off. Let me tell you, climbing a steep hill in sealskin moon boots trying to catch a pack of dogs while a man waves at me and mouths ‘bye bye’ is one of the weirdest and most horrible experiences of my life. Elsewhere the wife had been tipped off on a frozen lake and stood in terror as her driver obliviously tore off into the distance, not knowing whether to brave the ice on foot or stay where she was and, presumably, die a slow death from exposure.

When actually on board, all the while the driver is screaming at the dogs, who very clearly understand his commands better than I did – ‘Aye’, I managed to fathom, meant turn right, which they did instantly, although what ‘Yoop yoop yoop’ meant as we hared along the flat I failed to work out. There was also a more complicated command that sounded a lot like ‘Are we there yet?’, which was unfortunate to hear as I prayed for it to be over not long after we’d begun.

This makes it sound an appalling thing to be doing. The truth is the start was all rocks and the rest was all right. Tearing along at 20mph on snow behind a pack of dogs can be exhilarating, particularly once you’ve mastered leaning with the sled and its driver to avoid tipping off (which I mercifully avoided doing after my first spill).

You simply have to have your wits about you, watch what’s coming and react according to the laws of physics, and you’ll be able to make the most of the experience. And the ride includes some quite stunning views of the Ilulissat icefjord, where the inland glacier meets the Atlantic in a stunningly blue and white collision of temperatures that generates the icebergs that ultimately drift out to destroy giant ships. 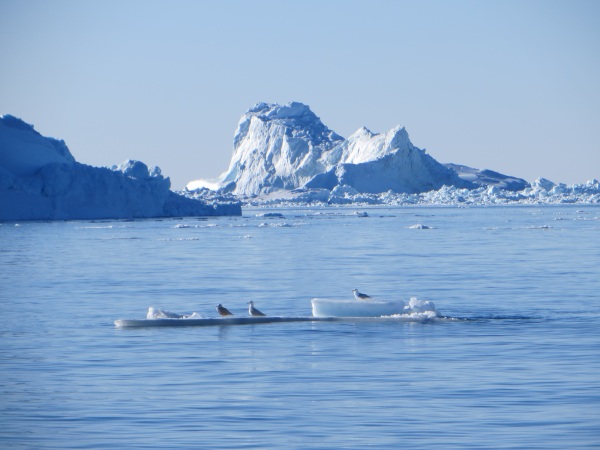 A boat trip among those very icebergs is a clear highlight of this part of the world. They are quite gigantic and remarkably beautiful up close. The classic, jagged mountain-style icebergs live alongside smooth, flowing creations that look like they’d be perfect for a cheeky schoolboy’s toboggan. The smoothness is formed beneath the water before gravity flips the iceberg over, although my brain lets me down when I try to work out how an object that is seven parts underwater and one part above can physically turn over like that. The best I could come up with was ‘Maybe it’s seals’.

One of the happiest sights of the trip was Ilulissat from the sea. Returning from the icebergs, the vision of the city’s kaleidoscopic buildings was oddly heartwarming, which was welcome given that it is, let me assure you, ball-freezingly cold in a boat among icebergs, regardless of what the temperature may be up to on land.

A guided walk around Ilulissat reveals some interesting, and painful, things about the recent history of the Inuits. Trouble began when America decided the area would be perfect for a few military bases after the Second World War, and the Danish administrators (Greenland is not yet its own nation) found it hard to say no. They attempted to keep military personnel away from the Inuits but failed, and the mix of cultures was not good for the natives whose thirst for booze became as fearsome as their tolerance was weak.

Our guide told us that it’s not uncommon for the Inuits to decide one day they fancy a drink, and embark on a bender of a few days with no regard at all for their jobs, drinking their money away entirely before heading back to the boats – most work here involves fishing in some way – to pick up where they left off. Two or three solid weeks later, same again. They were formally paid daily or by the job or quota, but their Danish paymasters have taken to paying them a fortnightly or monthly wage to prevent them drinking every penny as soon as they get it, not that it really stops them doing so.

Such is the damage the west has done to these people. One of the buildings in the city is a tall, wide, sore-thumb housing block. We were told that in the 1960s, when the Danes embarked on a well-meaning but disastrous attempt to westernise the Inuits, many were shovelled into this brand new block and expected to be grateful for it. The rooms came with sparkling new tumble driers. As they now had little to no outdoor space where they lived, the Inuits assumed these machines were where they were meant to dry their fish, as they had done for hundreds of years. At least this sorry tale ended with plenty of work for the town’s only electrician. 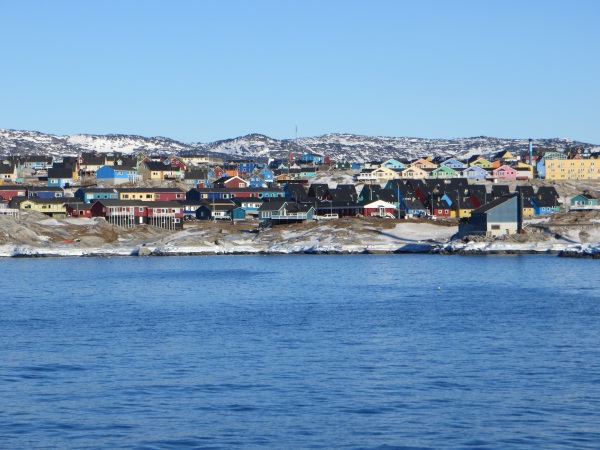 An interesting insight into the minds of a people largely unsullied by western ways so far comes with their driving handbook. Half of this thin volume is given over to explaining why, in all cases and at all times, the pedestrian has right of way. At one point, as a group of five, we waited for a local bus to go past so we could cross the road. The bus sat there, seemingly patiently, but as we were told afterwards most likely wondering why we were refusing to cross in front of it, and probably wondering what the hell to do if we carried on waiting there.

Where we didn’t go on our ‘culture walk’ was among the dogs. You are well advised to leave them alone – they are not pets, they are wild animals that are put to work like…dogs, yes, fiercely loyal to their owner and he alone. Should you try to pet one, you will likely get hurt. And if the dog tastes blood he will want more, so any dog that bites a human is immediately shot, along with any dogs who have witnessed it.

Similarly any dog that gets too old to pull a sled is shot. As hard as it can be to accept for anyone who likes domesticated dogs, in Greenland these are not man’s best friend, they are wolves that agree to do as they are told in return for a regular supply of food, nothing more. It is the Inuit way of life, and it must be respected.

Still, this seemingly heartless culling does little to quell the numbers, as the occasional howling of a large group of canines demonstrates. It seems as though one dog decides on a howl and the rest pick up on it as a great idea, enjoying the racket the pack makes before shutting up as one after a couple of minutes. We are all too keen on the wonderful sights of nature, but its sounds can be equally impressive.

At one point as I hurtled across a frozen lake that sounded as though it may give way at any point I was as grateful for those dogs as its possible to be. The dogs are the abiding memory of Greenland and the strange existence of the Inuits, sullied by people like me but dependent on us in other, troubling ways. It’s a trip I’m glad to have made, but one I could recommend only to those who know exactly where they’re going and why, as Ilulissat is a place where you need to make an effort in ways you wouldn’t ever imagine you’d have to.