“We named the dog Indiana.” 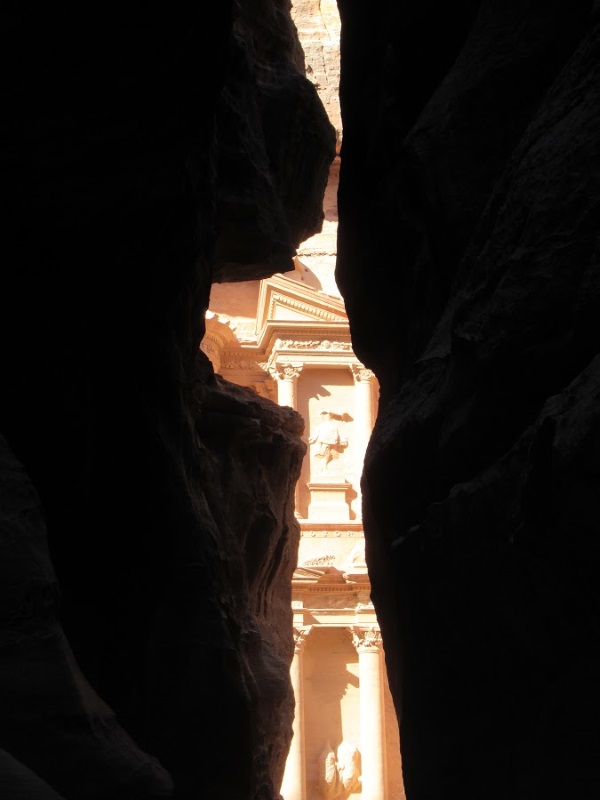 I’m not going to deny being an Indiana Jones fan. But we’ll get to that.

It’s true that the Middle East isn’t everyone’s idea of a relaxing getaway. Yet sitting in its centre is a country that seems surprisingly resistant to the religion-based mania that affects many of its neighbours: Jordan. A fair-sized army is doing a useful job repelling bomb-laden scrotes sneaking across from Syria and Iraq, both of which border Jordan. The occasional police checkpoint can edge at the nerves a little as a skeptical copper strolls off with your passport, but otherwise it’s no less safe than anywhere else in 2017, and needs tourists.

And, helpfully on that front, it contains Petra. But we’ll get to that.

Our first stop was Madaba, a small town south of Amman that serves as a useful place to crash after a late flight. In a cab under a red waning gibbous moon, the main question on my lips was: how the hell is he seeing those speed bumps? They are everywhere and seem virtually impossible to spot before you’re at them. Brake and axel repair shops must do a roaring trade here. Mechanics in general are probably bathing in cash given most drivers we encountered in Jordan were apparently playing at Carmageddon.

Madaba by daylight is nearly identical to everywhere else in Jordan by virtue of the ubiquitous sandstone. Every building is made from it, and nine out of ten are plain square blocks like an infant’s first crack at Minecraft. Do they have no architects here? Is paint banned? 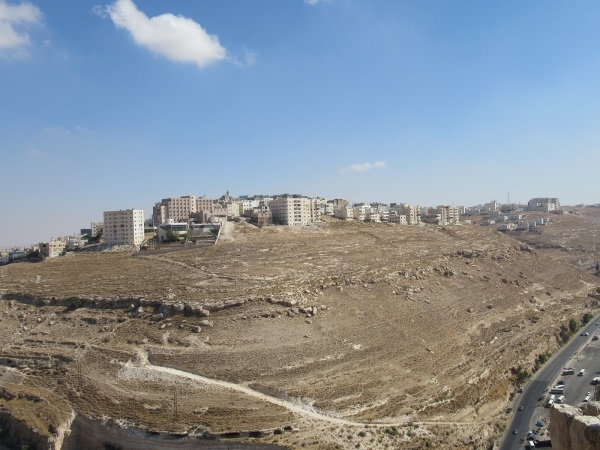 The ruins of castles at Kerak and Shobak are curiously placed atop mountains surrounded by not a lot but they were impressive in their own way. Certainly at Shobak we could begin to comprehend the beauty of the landscape, the only modern structure of note a lone wind turbine on the horizon a few miles away. And then it was time for the main event.

We’d decided to see Petra early in the trip. Yes, I admit it, I’d watched Indiana Jones and the Last Crusade and wondered where that extraordinary temple could be. On such whims plans years later are formed. People tend to believe there’s a child within me making all the decisions. They’re right, don’t care, so there.

There was an injury, of course. I’ve dragged football-ruptured foot ligaments around South Africa and a squash’d torn calf muscle around South America, so in theory something called Anterior Tibial Tendonitis should be a walk in the park, specifically Petra Archaeologic Park. There’s the main Jones-related monument to see – the Treasury – then probably a few other bits. Not much walking, right? 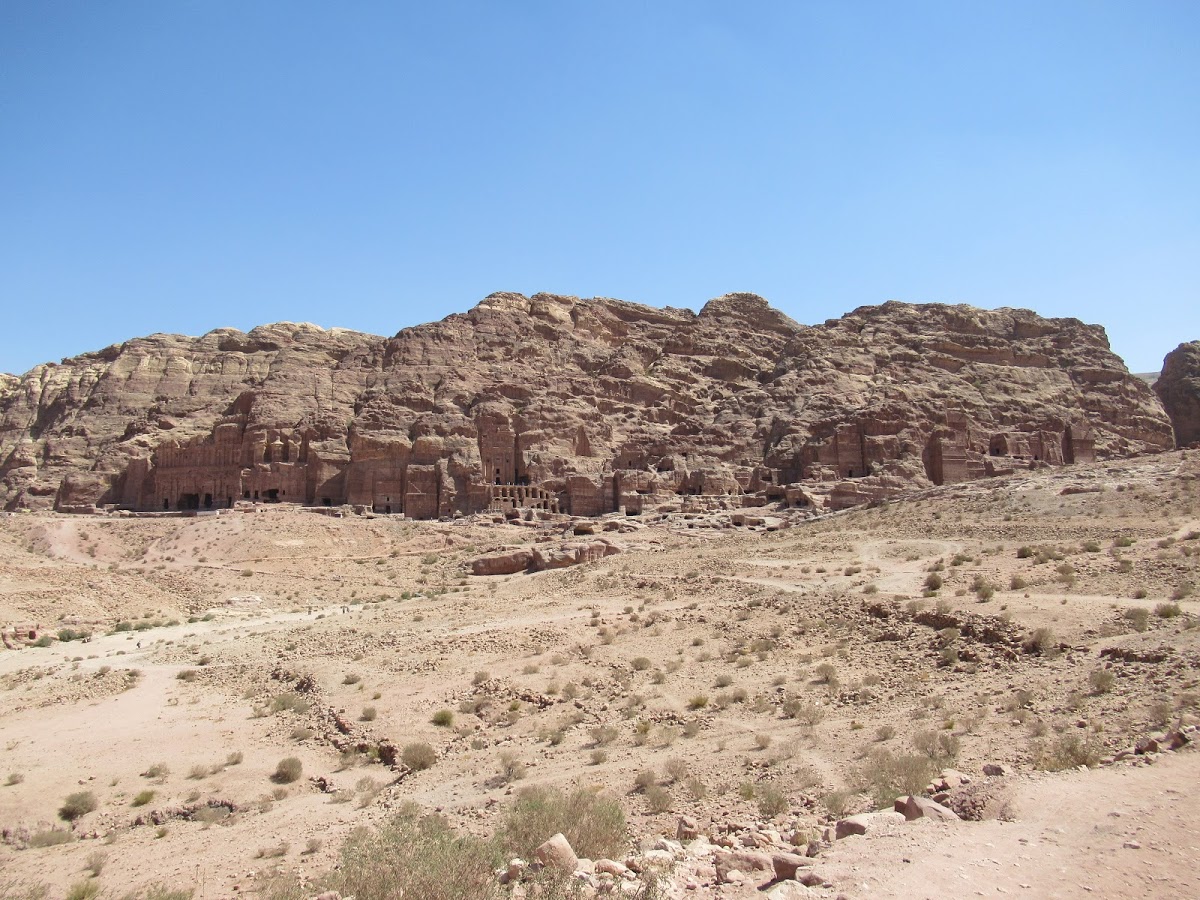 Oh dear. The place is on a much bigger scale than we’d considered. An entire civilisation, the Nabataeans, made this their home by chipping huge holes into the knobbly mountains arrayed all across this part of the world. Evidence of their existence is everywhere, with decorative frontages in seemingly inaccessible places far from the main tourist path through the centre of the park, which leads to the Nabataeans’ Monastery.

We managed to make our way up to the Monastery without the aid of one of the many donkeys being yelled at by Arabs around the place. Donkeys are not treated well, not least by the idle bastards sitting on them. I’ve never wished for anything more than the corpulent beast wobblying down some steep steps – giving the words ‘shift your ass’ horrifying new realism – to fall off, as she very nearly did. Other than donkey, camel and horse-and-cart rides for the lazy, locals make their living selling a vast array of scarves and trinkets to the unwary tourist not expecting to see Derek Trotter halfway up a mountain. They ranged from the helpful yelling lady trying, with limited success, to explain to a pair of idiots the right way to go, to a family literally screaming at each other like the Fratellis, complete with Sloth.

The steps and curves of the highest trail in Petra, the path to the High Place of Sacrifice, were thankfully too much for donkeys leaving only the aforementioned idiots to puff and clamber our way to some of the most remarkable sights I’ve ever seen. The vastness of the place was revealed even more fully from on high. The path leading down revealed more temples and monuments hidden from the main track, yet more evidence of the extent to which the Nabataeans made this place their own.

But nature has had its own say. Immediately preceding the famous Treasury, a mountain has split to leave a narrow pathway known as the Siq. Its dappled stone heading a hundred metres into the sky is an awesome thing to see. That said, the Treasury itself…well, you can see why Spielberg picked it, that’s all I can say. 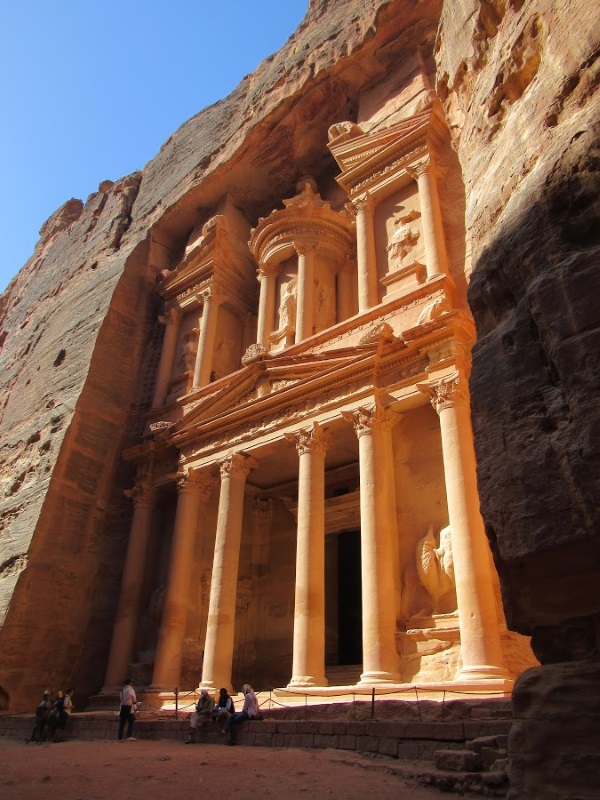 I realised the moment we left I would miss Petra – a good sign. But there were other things to see, such as the swastika graffiti’d onto a bus stop on the road south, proving arseholes are a worldwide phenomenon. Camels began to appear with increasing regularity; such bizarre creatures. It hadn’t really occurred to me they roam wild in a place like this unless they’ve ‘agreed’ to swap their untethered freedom for a regular meal.

Strange mixtures of scenery continued – at one point I spotted a field packed with camels grazing on sporadic plant life, next to a hi-tech power station, which itself was next to a lush, deep-green, camel-free crop of some kind. Either side of all this was scorching desert. This was on the road to Wadi Rum, where we were to spend a night as Bedouins. The trip hereby takes a turn.

Driving around in a jeep in the desert, mountains jutting from the ground majestically, was quite enjoyable. Being deposited on the sand, at about midday, and told to walk 30 minutes uphill through a canyon where the driver (said Bedouin) would be preparing us lunch, can now rank among the worst experiences of my life. Hot I hate but will tolerate for experience sake. Sand I would gleefully ban on my first day in power. But each was nothing compared with the demonic airborne nightmare throwing itself at me from all sides.

Flies, at the best of times, can fuck off. Jordanian flies, however, hunt in squadrons usually reserved for scenes in movies where the Mummy rampages over a hill towards relic thieves. Just standard, non-stinging Musca domestica, they spent the entirety of this half-hour hell attacking my ears and face, and continued their attack into and on the lunch our friendly Bedouin, also now enemy, had made for us. In 26-degree heat I had to put my hoodie on and zip it up just for the tiny satisfaction of knowing I could still hear them everywhere around me but they couldn’t actually penetrate my holes any more. Two hours of these flies. Two goddamn hours. 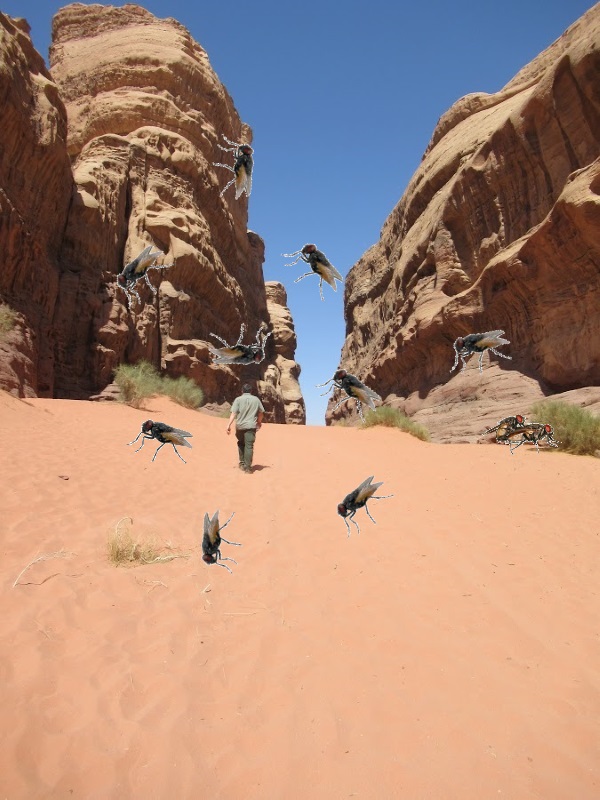 I promised myself I wouldn’t moan about that, so I’m glad you’ve seen me keep my word.

The night involved a group of Bedouins around a fire having a seriously great time ‘singing’ at a pillock with a lute and cavorting delightedly with a stick one of them found somewhere. As pointed out by the zawja at the time, this is what passes for entertainment in a country largely devoid of inebriation. During the night a scratching at the tent – in a desert, in the Middle East, many miles from so much as a policeman’s helmet – had me fearfully wielding the world’s smallest torch as a weapon assuming one of the Bedouins had been at the mint tea. Only after half an hour of staring in the darkness and setting every last ear hair to pick up every last whisper from outside did it occur to me: it was a bloody camel. And sure enough he’d left a giant steaming gift welcoming these visitors to his country, right outside the door.

But enough of how I enjoyed Wadi Rum. Our final day in Jordan involved the drive back to Amman via Jerash and the Dead Sea. The latter is where tourists go to float and blind themselves on water so salty it’d make a pirate cry. We chose instead to stare at it from its banks, and across at Israel on the other side.

Jerash is a modern town built next to the ruins of a far older Roman one. And what ruins: huge temples and colonnades, arches and amphitheatres, an extraordinarily well preserved Rome away from Rome. To make it all the more enjoyable it’s exactly the kind of place Islamic State would dearly love to smash to pieces to teach us all some sort of baffling lesson, but as they’re being kept the other side of the Syrian border, 20 miles to the north east, they’ll just have to suck it up. 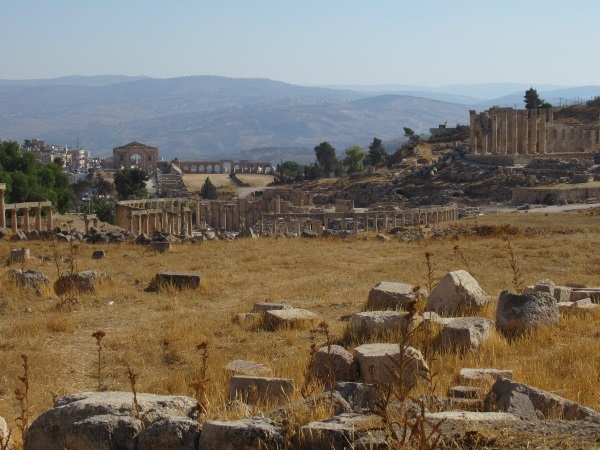 As for Amman, a single night there showed it to be a fairly wealthy, cosmopolitan sort of a place, a nice mix of old and new, with finally a bit of colour to the buildings and even a liquor store or two. Unbeknownst to me the name bestowed on it by the Romans was Philadelphia, so in a sense I suppose I was destined to come here all along. The menu of the nearby dinner diner promised me ‘Vegetables with meat problem’ but my hopes were dashed when the miserable shite serving us brought me chicken and rice instead. Everything in Jordan involves rice with either chicken or lamb, often yoghurt, and various breads. It’s uncomplicted and fairly enjoyable, though I was screaming out for a deeply offensive bag of pork scratchings after a week of it.

One place we stopped by earlier on the trip was Mount Nebo. Apparently this the place Moses came to die, though given he was supposedly 120 years old when he climbed up I think we’re in pinch of salt territory. Noah plied his trade around here too, as demonstrated by the small boy leading two sheep and two goats down the hard shoulder of a motorway. Religion is obviously a thing in Jordan. Mosques are presumably common given the frequent caterwauling of the prayers you hear in all Muslim countries, yet the buildings themselves were unobtrusive, blending in perfectly, probably because they were as white as everything else. To assuage understandable British fears, Jordan is not an alcohol-free country, though most places don’t serve it and we were happy to forego the £8 mini-cans of Amstel of those that did. Not so the gigantic German, likely post-donkey, we saw in two different places respond huffily (“Es ist nicht gut hier!”) to local traders’ apologetic refusal when he demanded beer. Shut up you utter buffoon. BYOB or STFU.

As we ended our time in Jordan, thoughts turned to impressions of the place. And my mind came up blank. It’s an unexceptional country, neither one thing nor the other, but that’s not necessarily a negative. It’s neither looker nor eyesore. It does have an edge to it but you’re hardly looking over your shoulder. The people are neither hugely welcoming nor reluctant to embrace heathen tourist scum like us. In a region wracked with turmoil and division, Jordan calmly and quietly gets on with it.

Yes it’s a land of long, hot, dreary highways built on rock and sand, and there’s not an architecture degree in sight. But it has Petra, and not many countries can say that.