“And after this, I never want to talk about it again.” 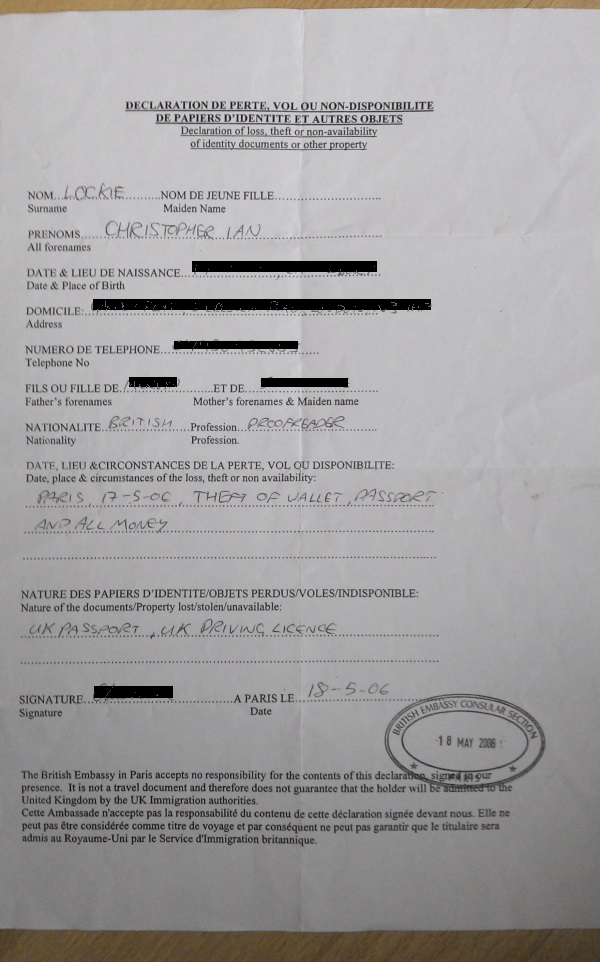 Some years ago, I went to Paris. For the rest of my life I will wish I hadn’t, not least because almost everyone I know has heard a variation of the story of what happened to me there, and made their own mind up about it, without knowing the truth.

Well, here’s the truth, unvarnished and in full. It contains drink, naivety, crime and the lowest form of humanity I have yet encountered in my global travels – namely Parisiens.

2006, and a London-based football team gets to the final of the European Cup, to be played in Paris. Never been this far before, the big time at last, we have to go, says the group of six who duly make the fateful trip. They have no tickets, but vaguely hope they can find some from somewhere. And if not surely Paris has a rosbif-friendly bar they can watch it in.

Such a bar is found, including toilets so overflowing from before kick off the punters’ shoes are an inch into urine throughout. During the match, one of the group is nearest the heaving bar and ends up buying round after round after round, spending arms and legs and drinking a barely credible quantity as a result.

The team go 1-0 up, but lose 2-1 and the group leaves the bar drunk and vaguely glum but knowing they’ve done their best at both football and drinking.

Of this group of six, five are immediately starving and demanding the food that will certainly send them to sleep. The sixth – have a guess – wants nothing more than to continue to drown whatever sorrows he can still find submerged in his near-liquid brain. So as five waddle about wondering which dirty burger bar deserve their hard-earned, the villain of the piece instead slinks off by himself to a nearby bar for a drink. He sits, has one drink, then leaves, only to realise his comrades have disappeared.

Stumbling around trying to find them swiftly becomes tedious and another bar is sought, found and collapsed into. In this second bar, our central character is accosted by two black French teenagers. He initially wonders what they’re on about, jabbering back in his broken, drunken, Englishman’s French, before eventually gleaning they mean to take him to a much better bar nearby. He thinks: drink, I like drink. He leaves with these two young Frenchmen.

After a walk of probably around 20 to 30 minutes – time is no longer entirely linear by this point – the two youths manoeuvre their drunk companion into an off-licence, wherein they say they’re quite broke, and could you buy us a bit of booze to make our lives whole? Of course. Wallet out – unwisely flashing the cash, in theory, since how much is left after the incredible outlay at the bar is highly debatable. A two-litre bottle of something is emptied out and replaced with a whole bottle of vodka and enough orange juice to keep it just this side of vomit-inducing.

The unlikely trio then sit on a stone structure in a nearby park, quite clearly nowhere near the centre of Paris. Our Englishman swigs from the two-litre and continues to talk in silly French, while the others – a group that is steadily increasing from two to more – listen and laugh, for reasons clear to all but he. Soon, a giant in a baseball cap and enormous shorts approaches, looking twitchy and somewhat displeased; he is seemingly dissuaded from doing this idiot abroad immediate harm by his two original drinking buddies. L’Anglais thanks them, and on with the show.

Eventually it comes time to leave. At no point up to now has the Englishman felt in danger. He says goodbye to his friends, asks the way back to town, is pointed off in the relevant direction, and off he trots.

At some point between here and the morning, there is a sudden meeting of knee and ground, as though pushed from behind, swiftly followed by darkness.

Which is swiftly, in those same non-linear terms, followed by light, for day has broken and Paris is still all around us. Pockets are found to be suspiciously empty. The last sight of the wallet was in the off licence…realisation dawns at the same time as the utterly incredible headache and apparently half-broken right foot.

If memory serves, the six are due in the car back towards the ferry for England at around 11am. Best find out the time then. A succession of people walking down the street are asked “Quelle heure est-il, s’il vous plait?”

Every single Parisien asked that question, without exception, looks utterly disgusted and walks by. Our wronged man finds himself at a loss to explain why the citizens of any city would be so heartless, but worse is to come.

Though quite coherent, he remains somewhat over the legal limit for walking, or indeed swimming back up the Seine to the hotel near the Eiffel Tower. He must ask directions to smooth his path. “S’il vous plait, c’est ou, le Tour Eiffel?”

A helpful woman points down the river and our English friend is hugely grateful. Finally, a Parisien he could call a fellow human being.

Around 20, perhaps 30 minutes later, the city seems to be becoming somewhat less city-like. Another passing stranger is asked for directions. He looks bemused, and points back up from where this lost soul has just emerged. The previous Parisien had been either stupid or, oh yes, lying.

Back up the river. No water for more hours than seems wise, he goes into a hotel to ask for some, finds no-one around and has little choice but to steal a bottle from the counter. The journey continues and eventually the buildings part to reveal the pointless metal monument to a city that should be stricken from the world’s every map.

The hotel is found surprisingly quickly…but our man’s friends have left, a little over half an hour ago. They’ve left no means by which he could try to contact them – nor his passport, which is even now on its way back to London in a six-seater manned by only five.

No money, no passport, no way home. At this point an internal voice whispers ’embassy’ and the hotel receptionist produces a little map with directions to where she thinks stranded Brits may be welcome. Another hour’s walk and there is indeed an embassy – the French rifleman on its gate angrily informs our Brit that it’s actually the consulate he needs, but it’s just along the road and for the first time today he sees a happy sight, in the form of similarly lost English people in football shirts begging to be allowed out of France.

Closed for lunch at 12pm, the consulate reopens at 2pm, and at 4pm our man finally gets to see the friendly if stern face of a Mr Pettigrew, to whom he spins an outrageous yarn of being robbed at knifepoint and losing everything, which is in fact probably true even though he’s not actually seen a knife since he last chopped up an onion.

Mr Pettigrew takes pity, asks for a number someone can be contacted on. The Englishman’s mother possesses the only number he knows by heart and around an hour later, when the consulate is about to close, she finally answers and our man gets to speak to the one person who can get him the hell out of there.

Tears fought back on both sides, the mother immediately arranges the wire transfer of £1,000 to Western Union or equivalent. Mr Pettigrew then provides the most important piece of paper in the world, a ‘temporary passport’ he calls it, which he claims will get him through the border “if the staff are in a good mood”. This being Paris, hopes are slim.

This piece of paper is also the only piece of identification with which our man must now attempt to wrangle £1,000 from a post office employee, entirely in French. The employee is surprisingly helpful and for the first time in over 24 hours the Englishman is able to eat, chomping on the finest dried-out day-old baguette he has ever had. To the Eurostar!

No more Eurostars today, first one tomorrow at about 6am.

So, a hotel. The nearest hotel to the Gare du Nord looks plush but not hugely expensive. The face of the man at the desk when this shambolic creature ambles in suggests he has every intention of pricing him out of it to avoid the ignominy of having a tramp stay in his upmarket establishment. Little does he know our man has funds burning a hole in his otherwise empty pockets. €275 a night, he says. Fine, says the Englishman, to startled response, and money and key change hands.

To the room. Phone call to his wife – relieved but disgruntled, understandably so. Shower, oh what a shower. Arrange wake-up call. Switch on TV, too tired to sleep. Pay-per-view filth, on repeat the whole night. Sleep, finally, fitfully, the occasional waking moment met with an eyeful of monstrous copulation.

The morning call seems to come five minutes later. Up and to the station in the same filthy clothes. Clutching the piece of paper with this much desperation obviously swings the vote at the passport window and our man is allowed through. The battle is nearly won.

Onto the train, wake at England, glorious, resplendent, friendly England, I will never leave you again my darling, my love.

Until this afternoon when I have to get the Eurostar back to Belgium for a weekend away with the wife.

« Corners and Crests In Cape Town | The Bulls of Pamp- hang on…Denia? »