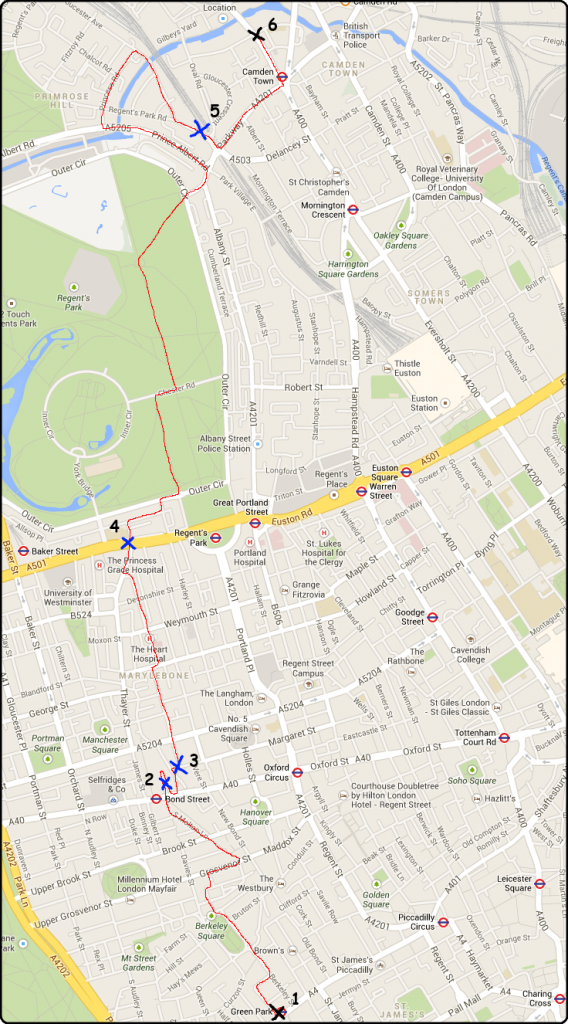 How a ramble across London begins, at what point a standard A to B turns into something more unexpected and difficult to control, is, one imagines, written in the brickwork of our city’s public houses.

Five of the finest ales our brewers have thus far conjured to the good, at Green Park station, at 3.30pm on a cloudy, humid June afternoon; all seems at peace. A stroll, I think. I set the internal Tom Tom to ‘somewhere north’, assuming no ill can befall a man made invincible by beer in the capital city of the nation of drinkers.

Mere yards along Stratton Street, I’m reminded that Mayfair is a monstrous arena of expensive cars driven by rapidly pedalling poor people while their master sits in the back wiping himself with fifty pound notes. The Mayfair Hotel is unassuming and bland in a way that only the minted can pull off. The stare of the bell boy having a fag by the tradesman’s entrance penetrates my very soul, he being aware that he has to don that truly unnecessary get-up while I’ve somehow found a way to dress like an elderly teenager and loaf about half-cut mid-week.

Berkeley Square is an unavoidable presence in Mayfair, and is filled with fresh means of confusing a man with each visit. Today, two electric cars are being charged outside the glass-fronted Berkeley Square House, where I once had an interview some years back. That any resident or frequent visitor would be seen dead in a rechargable car is laughable, but that must be the point – look at us, we’re eco-friendly because we can afford to be. Now please leave, preferably in these silly little cars.

(I cannot for the life of me remember what the interview was for, or envisage the type of person I would have become had it ended with me working in Berkeley Square. If nothing else these words would be behind a paywall, so count yourself lucky.)

Four men on bicycles attempt to kill me as I edge across road work-riddled Grosvenor Street. Two are bare-headed and dressed like regular people on normal bicycles, though their eyes are predictably hate filled as cars try to do to them what they’re trying to do to me. A third is wearing a flat cap and loafers and is heading west, away from his natural Hoxton heartland. The fourth is in full cycling regalia. As he zips by I witness confusion as he forgets what he’s wearing and scratches his helmet, at which point I wouldn’t dream of making a childish remark. 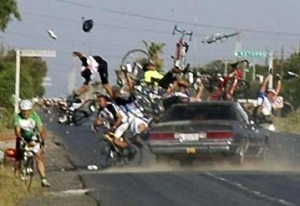 Londoners do not spend enough time looking up. We stride about in our own little worlds, plugged into music and podcast, learning to hate other people and our surroundings. This way we miss such glorious experiences as bowling confidently down Stratford Place, admiring the unique facades of the Botswanan and Tanzanian High Commissions, wondering what the grand building is at the end…end…dead end…and wandering back trying to look like you meant it all along.

There seems to be no choice but to spend 45 hate-filled seconds among the drones of Oxford Street before I’m allowed to break north, gasping for air into Marylebone Lane. Therein, an American woman shouts “Is this Regent Street?” to a man 20 metres away no fewer than four times, his confused look that of a Cornishman in Tokyo, before I’m forced to intervene and explain where they are, and where Regent Street is. That they may not care, that they may be looking for Paddington or Temple or the Holloway Road, matters not to a man as aggressively helpful as myself as I guide them confidently back from whence they came.

At the corner of Welbeck Street and Henrietta Place I am met by the reassuring sight of a congregation of London drinkers outside a bar. As I approach I perform the London Dance, arms wiggling and calf muscles flexing as I limber up for a pint, but suddenly – and ‘suddenly’ does not do justice to the immediacy of the alarm – in the midst of the crowd around the door it strikes me that not one person here is holding a drink, or even a cigarette. Nor are they in any way moved by my presence; they seem oblivious. Actively oblivious. It’s a trap!

Utterly unnerved by what can only be the latest Alcoholics Anonymous wheeze to ensnare unwary drunkards I make haste to the hitherto undiscovered confines of the Kings Head on Westmoreland Street. A crisp pint of cider is accompanied by the type of friendly, knockabout homophobia that only two strong female players at Wimbledon can engender and I’m swiftly on my way towards what has become a pint in Camden with a fellow who has recently made my pocket vibrate, which is perhaps why I’m best out of the Kings Head.

I have passed my favourite of all London’s blue plaques, on Welbeck Street. Thomas Young is described by Wikipedia as an ‘English polymath’ and by his plaque as a ‘Man of Science’. I know nothing of the man, but imagine being celebrated as a ‘Man of Science’! Not even my recent discovery that he was born in the village I spent two hideous years in primary school can dull my admiration for a gent who passed up a life of drudgery in Milverton for groundbreaking research into haemodynamics and the theory of light.

For a brief moment my surroundings are troublingly familiar and I realise I have intersected my misjudged Paddington walkfrom some months ago. Mixed feelings pushed aside I forge on towards the park.

York Terrace East is a suitably haughty name for a street where almost every house is fronted by ludicrous fake pillars, in identical magnolia. Why some of our city’s residents feel the urge to demonstrate their wealth is beyond me; spend it how you will, but continue to flaunt it and the next time the barbarians of Tottenham erupt in a fury of bricks and flame we’ll be directing the hordes straight towards York Terrace East. 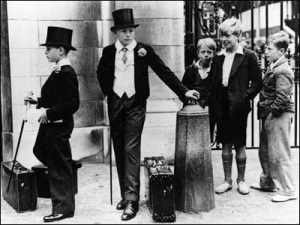 How we love our parks. The sight of London’s residents and visitors enjoying its green spaces is enough to calm the most forthright of convenience socialists. And such sights: a quintet of black-clad youths refusing to bow to the fearsome glare of the sun; a man daring to, one must assume voluntarily, leap about with abandon in a stars-and-stripes onesie; and by far and away the two most useless Frisbee players this world or any other has seen.

A final tipple en route in The Albert, a place I could describe in some detail were it not on this occasion the hottest building on earth that I have to literally hot-foot out of quick smart. The broken fan – I asked – grins at me contemptuously as I slither from the pub onto Princess Road, then Gloucester Avenue. Here I find an unexpected subterranean restaurant, packed to the rafters at a little after five, and a building on the other side of the railway tracks out of Euston bearing the ten-foot tall letters ‘PIRATE CASTLE’.

If pirates now live in castles I’ve obviously tipped over into the drinkers’ wonderland, making it time to meet my cohort to ensure I end my day gargling with despair. The Elephant’s Head, my favourite Camden drinker for reasons now lost to the mists of many cellars, welcomes me with its usual apathy and I’m left to mull another unplanned amble about our nation’s capital. Confusion and perils await a man choosing to tackle the metropolis while on the lean, and I take my survival not for granted but with thanks to Dionysus and Ægir and the ancestors of ale.

The soundtrack to this walk was The Greatest Generation by The Wonder Years.