“Don’t cry for her, I’m in bloody agony here” 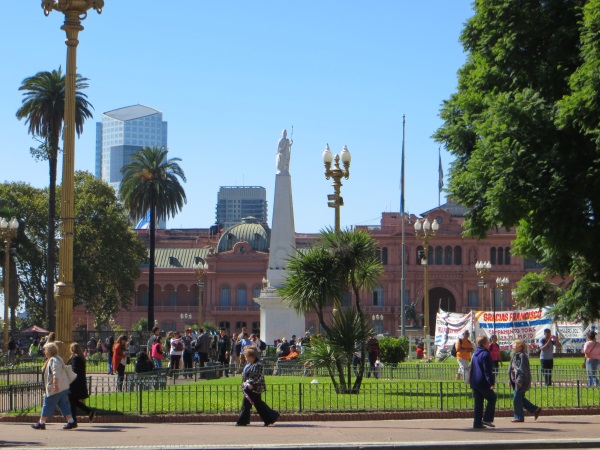 Antarctica excepted, South America was the last continent needing to be ticked off my list. Fourteen hours on a plane though. Ouch.

Which coincidentally is a word with the same number of letters as others I screamed when bursting, popping, splitting, tearing and wrecking my left calf muscle in a game of squash five days before departure. So it was off to Heathrow on crutches, skipping queues under the baleful gaze of travellers assuming they were but handy props, and onto a plane to a city like nowhere else I can imagine.

‘Holy Christ I’m in South America’ is an appropriate sentence to be muttering while zipping along the highway from Buenos Aires airport to the city. We shot past a six-spired chapel, the gloriously creepy temple of the mad Mormons who have somehow spread their gibberish this far south, and into a queue for a motorway toll booth. The cars in the many lines were beeping, often tunefully, which it later transpired was because if they have to wait for more than three minutes the council has to open the gates and allow them through for free. These honks are a tight bastards’ symphony, a hilarious choir of misers.

It takes about fifteen minutes of walking around Buenos Aires to realise it’s a European city transposed – specifically Barcelona, its cheeky nephew to the east. Yes, the older Spanish city is the upstart, because Buenos Aires is huge, incredible and baffling in ways Catalonia couldn’t hope to emulate. Early impressions were that coming all this way to find Europe was a real disappointment. Early impressions were wrong. 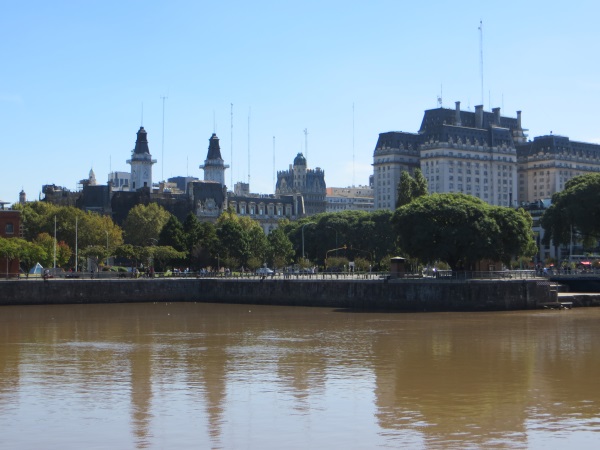 You read a lot about Argentina before you go there, most often about how you may not come back. Crime is rife in…well, the world, but if you don’t stroll streets of a major city wiping your sweating brow with tenners you’ll normally not come to the attention of the local villainry. Buenos Aires is no exception and felt safe throughout the trip.

Not that tenners will get you far, ten pesos equating to about 65 pence at the ‘blue rate’. I couldn’t explain the blue rate if I tried until it rained in the Gobi. It involves a black market (fully illegal) way to get cheap Argentinian currency, everyone does it, the government largely ignores it (uses it themselves, even), and it necessitates walking through a blank door into a three-foot square room and handing over US dollars in return for thousands of pesos. You’ll need spare pants the first time, but by the second time you’ll be congratulating yourself on your newfound giant balls.

With our many pesos we of course bought steak and red wine, Argentina’s famous twin devilments. The wine was most excellent, Merlot and Pinot Noir and something called Syrah delighting our non-sommelier taste buds. But in a seriously unexpected development, it turns out they don’t season steaks in Argentina. Giant slabs of superb, succulent meat consistently dodged greatness for the want of a pinch of salt. It seems Argentinians think the quality of the meat is enough. They are palpably incorrect.

Your dodgy pesos will also buy you many necessary cab rides in this gigantic metropolis. To a man and occasional woman, the cab drivers are easy to flag down, friendly and understand simple instruction at least 8 per cent of the time. We were staying at the conjunction of two central streets, named Santa Fe and Vidt, so our evenings inevitably ended with this conversation:

It’s important to be patient, because every single cab driver has a mugshot on their license in which they look like a hood from one of the Five Families, even if in person they are more likely to wiggle to appalling Latino music at tooth-rattling volume while driving than to concrete barrel you into the Rio de la Plata. 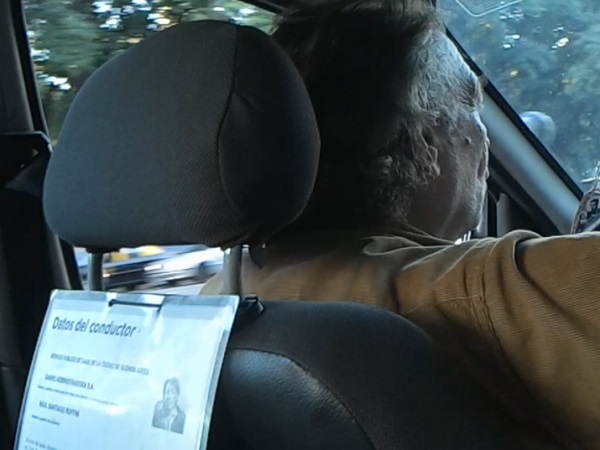 A spot of Spanish is a must in a place like this, and we took nought but a phrase book. But make the effort, attempt something, and you will be rewarded with the heroic patience of the Argentine people. Without exception, we were made to feel as though they appreciated we’d come to see their country and were doing our best to make ourselves understood, not resorting to the horrific Englander abroad stereotype. An extraordinary conversation with a toothless maniac named Hugo was a genuine pleasure, though we didn’t take up the offer of his ride to the airport in his ‘Hugojet’ mini-fleet given it was likely just the man himself in a soiled Mondeo.

And after just a few days you find your own Spanish slotting into place, understanding the gist from mannerisms and context. For someone like me it’s a joy, rekindling an interest in the language I held briefly years ago, and a stark contrast to certain other world cities and their gnarly inhabitants. I tried it once in Paris and that sickening cist and me now want each other dead.

Our accommodation in Buenos Aires was a marvellous find. A guest house of sorts run by an Englishman (and vague Kenneth Branagh lookalike) and his Argentine partner, it proved a brilliant haven from the terrors of Buenos Aires that never did materialise. Our excellent hosts did the hard yards for us, suggesting sights and restaurants, booking tables and the like, and if you think that’s cheating I hope your jealousy keeps you warm at night. It would have been a lesser trip without them and I will bore everyone I know and many I don’t recommending the place, though the shampoo they supplied had a very semen-like consistency, which was a little disconcerting of a morning.

There are places you go in Buenos Aires and places you don’t. The rich barrios of Palermo, Retiro, Recoleta and their surrounds are great for walking and feeling as safe as anywhere in the world. In Recoleta there is an enormous, ridiculously plush cemetery filled with creepy crypts, including the remains of national icon Eva Peron, a corpse with quite the story behind it (she got stolen at one point) and which we didn’t find because the bloody place is like Hampton Court Maze. As was the park, containing many cats for some reason, with all but one of its exit gates inexplicably padlocked leading everyone within on a lengthy dance around its border. Did I not I mention my leg was knackered? That day’s exaggerated limping caused me to pull a groin muscle, which I put Deep Heat on, which in turn deeply heated my penis in harrowing fashion. 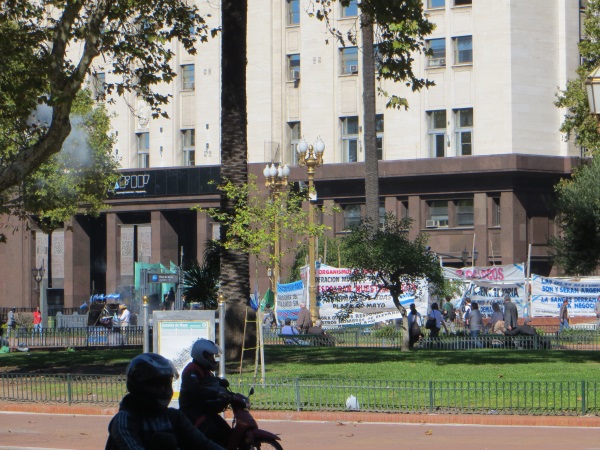 The Centro barrio is where the government happens, and where Argentinians practice the art of protest. Most days there seems to be some rally down the Avenida 9 de Julio, and tourists are warned to avoid them. There was no avoiding filling my new pants every time a huge firecracker went off sounding a lot like a gunshot as a parade of vociferous trade unionists marched in the name of a dead politician named German Abdala in front of a bored-looking police line.

San Telmo is the old town, also a bit dodgy late at night but by day just a little tired, with grimy, crumbling buildings that aim for venerability but look more like Toxteth high street. A old man in faded army fatigues patrolled the streets of San Telmo with a huge truncheon, and nobody seemed to bat an eyelid. The barrio of La Boca meanwhile is a tourist trap filled with smiling murderers, apparently, so we didn’t go there.

Argentina is famous as a land of tango, but our half-hearted attempt to watch some ended in not-unhappy failure. We settled instead for a spot of polo, joining the appalling jumpers-round-shoulders brigade in a large arena built for this utterly unknowable sport. The players seemed to miss the ball as often as not, a ball that’s virtually impossible for spectators to follow, and nobody fell off and lost a shoulder, which was more than disappointing given the steep 100 peso (£6.50) entrance fee. Both teams seemed to be shooting at the same goal, and it somehow ended 12-6. In the second game there was a man playing called Ignatius Duplessis, so we left at half time.

After four days of stumbling around Buenos Aires it was hard to say whether it was a likeable place – it was so European, and yet simultaneously harder to gauge than anywhere in the world I’d been before. But then we spent a day in Montevideo and a couple more at the Iguazu Falls to the north (where this committed Guinness drinker was delighted to exclaim “Oh my word, that’s a fucking Toucan!”) before heading back to the Argentine capital. Unexpectedly, the return to Buenos Aires seemed somehow like a homecoming. I had missed it – it had got under my skin and I hadn’t even known it.

And there’s the key to Buenos Aires. Is it a city for tourists? Maybe, though it’s bloody hard work and unforgiving if you don’t play the game. But to live there, now that would be easy – you’d get the basics of the language in a few weeks, you’d work out what the hell the blue rate is about, and you’d soon realise the cab drivers are a solid part of the infrastructure, not all buddies of Paulie Walnuts. Maybe I’ll never visit Buenos Aires again, but if I ever get tired of London (and in turn Helsinki, Philadelphia and Melbourne), I know where I’ll be looking up house prices.

« The Bulls of Pamp- hang on…Denia? | Drums and Disquiet in Montevideo »