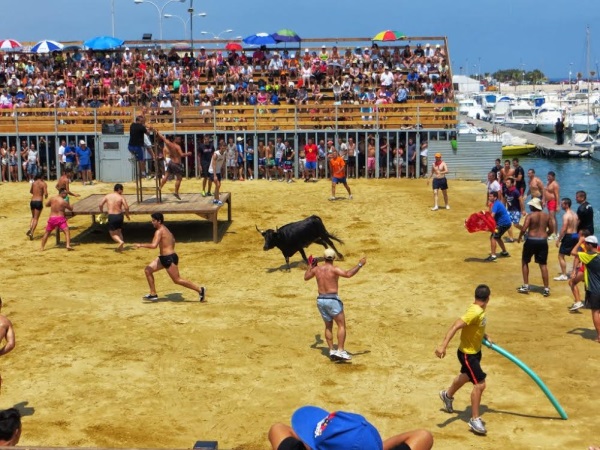 What is it with the Spanish and bulls? Half of that nation likes to dress up like Romany dancers and fight them, while a load more allow themselves to be chased by them down streets that end up looking like downtown Damascus.

In Denia, they throw them in the sea.

Denia is the type of Spanish resort town that suffers by association. It lies in the province of Alicante, the city by that name not being the most marketable venue outside of tourists of expandable waistlines looking to expose their white skin to a cowering sun. Even nearer, just 30 minutes’ drive to the south of Denia, lies Benidorm, about which surely no more needs to be said.

Denia itself, though catering to the inevitable influx of British tourists each summer with dual-language restaurant menus and the like, does attract the calmer, more circumspect brand of Brit. There is a respectable ex-pat community in the area – more ‘A Year In Provence’ than ‘Another Year Not In Pentonville’.

But this being Spain, they have bulls. The town’s annual festival includes a low-key ‘bull running’ event every few nights, along similar – but far safer – lines as the Pamplona extravaganza taking place at the same time a couple of hundred miles to the north.

Where Denia comes into its own is in the festival’s twice-daily ‘Bous a la mar’, which translates rather literally as ‘bulls in the sea’. 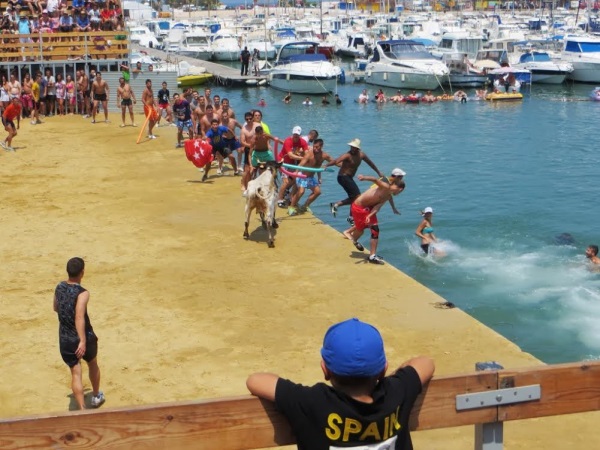 The event takes place in a purpose-built, permanent though ramshackle arena, which holds around 1,200 people at full capacity. Three sides of its square are seated, while the fourth opens up onto the town’s Balearic Sea-facing marina. A large boom protects the boats in the marina from escaping bulls, which is a sentence you will read nowhere else for as long as you live.

Below the seating is a series of vertical metal poles. At first sight this is scaffolding holding up the stands, but the poles are crucially wide enough apart to fit humans and not cattle – the €5 entrance fee can be waived if you are willing to stand the other side of these bars as a bull charges about a short distance away.

But what use would all this be without madmen? At any one time you will find 30 or 40 people, mostly shirtless musclemen, goading the marauding beast, running about to keep out of its way or leaping onto or beneath the two central structures that offer brief safety from an unexpected horn up the ringpiece.

The vertical bars offer another escape route. Unable to get to the central structures (or the water), a man will sprint at the bars and hope beyond hope that the people there will get out of the way and/or pull him through before he’s flattened by the advancing monster.

The option of last resort is the water. When not trying to impress onlooking females by getting as close to the bull as possible without harm, a man will stand by the water’s edge and try to attract the bull towards him. The ultimate goal is to get the animal to charge, leap into the water and have the bull jump in after, whereby it will be lassoed by stewards in a little boat and dragged back to the arena for another round.

Bulls on land are frightening things – bulls in water, not so much. They paddle frantically while looking about as scary as granny in the swimming pool not wanting to get her new barnet wet. This doesn’t stop a look of terror appearing on the face of any man who thinks he’s safe in the water but suddenly sees a giant bovine apparition bearing down on him. Olympic swimming records would be shattered by many fat men if you stuck them in a pool with a bull behind them, though I suppose a crocodile would be more efficient still, and make for better TV.

It’s hard to know what to make of it all. The bulls aren’t being directly harmed, just wound up, so in that sense the Spanish are taking a step forward from the rather grim scenes of a standard bull fight. Yet if this took place just about anywhere else in western Europe there would be an outcry, not least because the whole thing seems wildly pointless (though no more so than standard bull running). 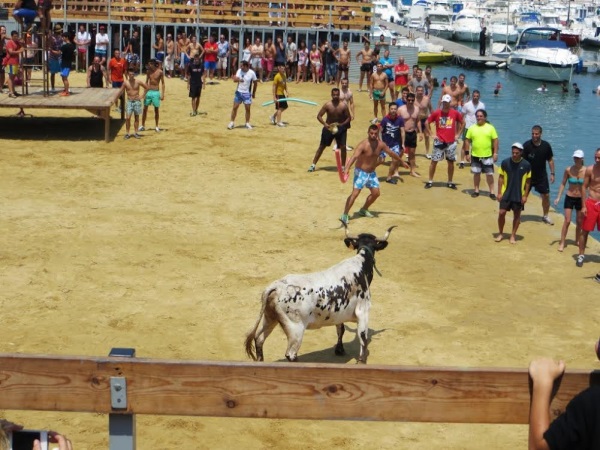 Perhaps the problem is that at no point does it seem any of the participants are in genuine danger. The bulls seem confused rather than cross, as intent on keeping out of the way of these lunatics as goring them. The first bull of the day (named, perhaps presciently, ‘Princessina’) came tearing out of its pen, ran down the back of the arena, then turned and bolted straight for the water and dived in, obviously wanting as little to do with these shenanigans as possible. The crowd cheered, making it somewhat unclear whose side they were on.

Nevertheless there’s little doubt ‘Bous a la mar’ is an intriguing spectacle, and in a quite excellent setting. Denia is dominated by the castle atop a rock in the centre of town, and surrounded by the Cordillera Prebetica mountain range.

It has the easy-going attitude you would expect of the Costa Blanca. In a typically bizarre incident, a large group of Spaniards sat about calmly relaxing in a car park it was possible for vehicles to enter but not exit (due to the relevant ticket-stamping cocktail bar being closed every Monday), until a random Dutch tourist sussed out how to let everybody out (he went and found ‘The Man’). In Britain such a scenario would have ended with the barrier and every ticket machine in pieces within minutes, BBC News providing round-the-clock coverage of the aftermath and the Ministers for Tourism and Transport sacked.

It’s far too hot, of course, upwards of 32 degrees daily, temperatures that will burn cheeks should a man be foolish enough to sit on the kerb for a few seconds. But if there’s one thing Denia teaches us, pretty bloody quickly, it’s that the quickest antidote to a sore backside is to hurl it into the sea (bull optional).

« Paris: A True Story | A Hop and Hobble Around Buenos Aires »