“We love you Enda Kenny!” 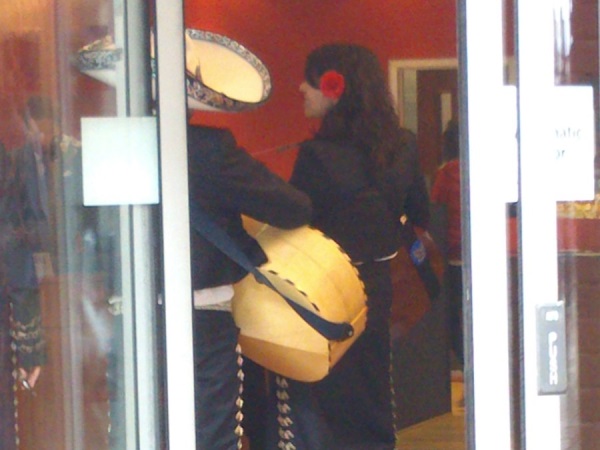 Upon landing at Dublin airport and sauntering into the city on a 747 bus, it seems for all the world that the only difference between this land and its nearest easterly neighbour is that the road signs are in both English and the native, impenetrable Gaelic. Two days later, it is apparent that a whole lot more separates Eire from the UK, chiefly the underbelly of utter lunacy in the Irish capital.

One slow Friday afternoon stroll through the city revealed an array of baffling sights that brought to mind the type of low-level confusion one experiences while being chased by a million bicycles on the otherwise sleepy streets of Amsterdam.

The city’s opening gambit was to stalk this unwary and partially hung over tourist with five emerald green-clad schoolgirls eating pizza in a horse-drawn carriage. At one point as they – we – moved past the Irish Parliament building, as one they yelled “We love you Enda Kenny!” This would be the Taoiseach, the prime minister of Ireland, and popular idol among the young, apparently. Eat your heart out, Ed Miliband.

Five minutes’ walk from almost-Edna’s official residence lies St Stephen’s Green, a beautiful park that threw up the second of the afternoon’s unexpected treats: five female Muslims in full battle dress laughing uproariously at Allah knows what, in Gaelic. This is the parallel universe in which the Troubles actually took place solely on the British mainland between elderly members of the Women’s Institute and a breakaway faction of gay-accepting, High Speed Rail-supporting, wind farm-loving nutters.

(For the sake of balance, I treat all religions with equal disdain – the first ‘local’ I’d seen at the airport was a Catholic priest and a powerful gratitude that I’ve never been an altar boy washed over me.)

Dublin has something of a begging problem, not least for those doing the begging of course but this city naturally has to be special when it comes to convincing you out of your change. Who wouldn’t happily donate the contents of his pocket to the man stroking his filthy rabbit, not a euphemism, halfway across a pedestrian bridge across the Liffey?

The reason for the trip was of course the ubiquitous stag weekend, and without destroying your attention by banging on about the exploits of a group of idiots old enough to know better and feel worse, it would be fair to say Dublin’s madness infected at least one of the group. Confronted with the costume he was to be forced to wear for the evening, the groom-to-be quite rightly told the best man in no uncertain terms to ‘get to fuck’. So, not wanting to waste the £25 he’d spend on the bright green female leprechaun outfit, the best man decided to wear it himself.

Cue an array of Dubliners congratulating him all night on his impending nuptials, only to be left floundering in dismay and a degree of nervousness when he inexplicably explained the conventionally dressed man next to him was in fact the ‘lucky man’. The only explanation we could offer was a feeble “He just likes dressing up”.

Dublin offers numerous further examples of absurdity: a middle-aged, prosperously proportioned man in full suit and tie being photographed in a park with an acoustic guitar; a small ginger boy with a hurling stick yelling “I’ll beat the fooken leprechaun out of yer, ya bastard!”; an amphibious duck-shaped tourist vehicle filled to capacity with men in Viking hats; and a man riding his bike down the pavement, doing a wheelie…on his front wheel.

Looking up ruefully at ‘The Happy Ring House’ on O’Connell Street after a weekend on the Guinness, being in possession of anything but, I am left to ponder that the city renowned for its ‘craic’ seems to have been taken over by people who chew on the drug of the same name for breakfast. At one eating joint I was told “We don’t have white lemonade, only red lemonade.”

Yes, well, like the Mexicans in the estate agent, why wouldn’t you?

« Languid in Ljubljana | Believing In Belfast »