“Fiver on the little bloke with the bleeding ear” 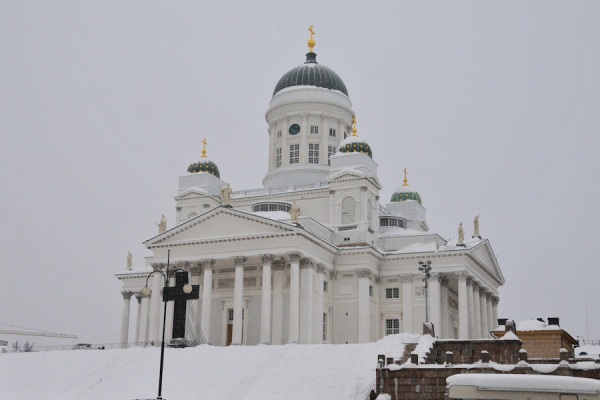 Recently I was sent a page of Finnish jokes, collected by someone keen to demonstrate the ‘unusual’ nature of Finns’ sense of humour. One joke read as follows:

Sakke and Ville are sitting in a cottage in the middle of nowhere. They’ve been drinking for three days straight and they finally run out of booze.
Sakke says to his mate “Hey, go and look in the tool shed and see if there’s anything to drink there.”
Ville comes back with a bottle of methanol, and says “We could drink this, but we’ll go blind!”
Sakke slowly looks around the cottage and out the window, and says “I think we’ve seen enough.”

I love Helsinki, I really do. I can’t tell you why, of course. A place as potty as Finland’s capital defies explanation – a visit there is made up of seemingly random, weird events and sights jammed together to make you wonder later on where the hell you’ve been, and yet desperate to go back immediately.

This makes Helsinki the massive alcohol binge of cities, fittingly, as the place is awash with booze. Almost every joke on the page I was sent involved alcohol in some way. Swimming on a sea of Kossu vodka does not automatically make for a happy life – the suicide rate in this part of the world is astoundingly high, especially in winter, with surveys (of survivors, assumedly) suggesting the long, freezing, dark nights do not combine well with Olympic-standard drinking. As a typical Briton, no stranger to a tipple, I feel able to empathise, which perhaps may further explain why I felt a mysterious connection with this place.

Though I’m reluctant to paint the place as a town filled with drunkards stumbling about smashing things up – nothing could be further from the truth – the incident that sticks most in the mind does involve libation.

Sitting in a restaurant just off Eteläesplanadi at about 8pm, the Friday night crowd is calm, happy, pleasantly sipping wine and tucking into a spot of reindeer, when a man rises unsteadily from his table and wobbles towards the door. On his way, he says something in Finnish to a man at a table near the door. This other man stands up, slowly, reluctantly, and follows the first gentlemen to the exit.

Outside, they proceed to kick seven bells out of each other on the icy pavement. And they are really going at it this pair, windmilling and roundhousing and flailing all about, both clearly three sheets to the wind which howls about them in their revelry.

The crowd in the restaurant, mostly Finns, seem vaguely amused by this. A bouncer – in a restaurant, perhaps a clue in hindsight – looks bored, but eventually steps in to break up the fight. As soon as he does so, the fight stops, the first man walks away up the street, and the second man returns to the restaurant, his ladyfriend and his meal. Life continues in Helsinki. This is a normal Friday night. No bystanders were hurt during the filming of this movie.

I have no idea whether this was a regular occurrence, or some odd ritual. Perhaps these were two pals making arrangements in an advanced sign language known only to Finns. All the same, there was a strange absence of menace about the entire incident, no fear of it somehow escalating as you tend to find in most other large cities. One should never condone such brutality of course, but it was actually quite impressive.

Though this may have been the clearest indicator of the madness at the north-eastern edges of Europe, it was far from the only one. The weather is another, and it provided constant insanity throughout the visit. Sideways weather, that’s the best way to describe it – sleet and rain and snow, with howling, bitter winds driving each full into your face, regardless of which way you turn or the strength of your balaclava. 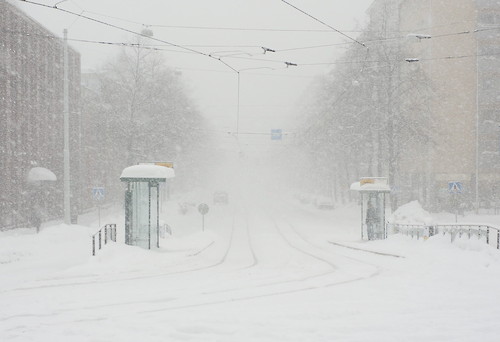 And yet, even in this I somehow found enjoyment. I’m not averse to cold weather, quite the opposite, but irritating weather isn’t ideal; even so, in Helsinki I was more than willing to forgive the city’s attempts to drive us away. My mind seemed to be treating it as a test: I had, for reasons inexplicable, decided I liked the place as soon as the taxi from the airport hit the first square whose buildings were laden with illuminated ads for weird-sounding Finnish companies and incongruous overseas interlopers such as Seiko and Daewoo.

In order to be accepted here I had to prove I could stand 30mph gusts of pointy snowflakes driven into my eyeballs as I wandered blindly ever nearer the edge of the icy death South Harbour had in store for me. It was a test I felt I passed with flying colours, though the wife was too sodden to pin the rosette.

How many Finns does it take to change a light bulb?
Five: one to hold the bulb and four to drink enough Kossu to make the room start spinning.

In many ways Helsinki is a typical Scandinavian city – we visited in winter, of course, the best time to see such a place, and it was suitably grey and foreboding but for one day of sharp, blistering sunshine that lit the city up in an eye-destroying demonstration of how living up here must teach you to expect the unexpected. At the end of that day the clear sky was suddenly filled by an unbroken blanket of grey, the snow began anew and a midnight peer out of the hotel window revealed at least half-a-foot covering already and a day of frozen stomping ahead.

And yet, in another sign of the bewildering nature of the place, by 9am the next morning every important road and walkway had been cleared of snow, left piled in mini-mountains all around and left to melt at leisure. The efficiency of the public services is another typical Scandinavian trait, but as this was my first trip to the region it remains in the memory as another weird sight when compared with bog-standard capitalist disasters such as Paris. 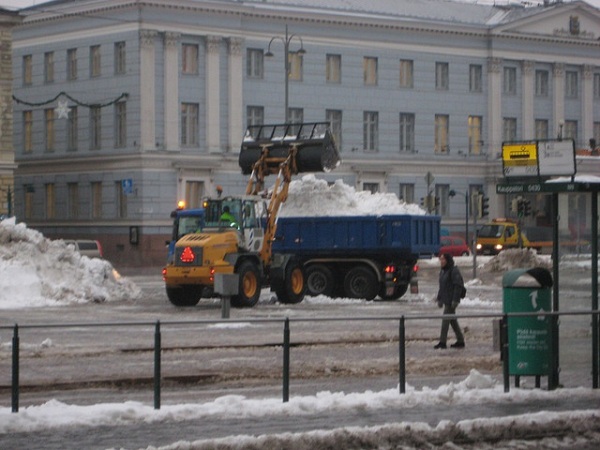 (Brief interjection: I thought to put London in the above paragraph, but I love London. I hate Paris, however. I love to hate Paris and will merrily grab any opportunity to bad-mouth it I can find. Perhaps one day I’ll write about why I hate Paris. It will include swear words if I do.)

The grey winter weather of most of our days in Helsinki suited the architecture. The staunchly progressive nature of Sweden meets the functional drabness of the former Soviet Union in Finland, though the Finns have adapted each to their own ends. In a style not unlike London, a sparkling new building will be thrown up right next door to what must surely have been the cleaners’ quarters of a military complex in a previous life, with no consideration for consistency or ease on the eye. This is a city that gets on with it; adapt or die.

Santtu was sitting in the pub with a yellowish drink in front of him. His mate arrived and asked him: “Oh, are you having a Jaloiviina, mate?”
“No” he replied, “it’s whiskey – I’m working tomorrow.”

Aside from chaps beating the sanity out of each other, the people of Helsinki seemed calm, pleasant and – here I find myself on perilously thin ice – pleasingly attractive. I will go so far as to say that of all the countries I have been to, I have never had my head turned more often than in Helsinki. At one point walking down an alleyway I glanced into the window of a below street-level café, and had to stop and go back to look again at what I can only describe as the most……and then of course had to make up the tallest tale I could muster in my flabbergastedness. “I thought I saw someone I knew”. Not bad under the circumstances.

There were of course a few non-sentient things to gawp at when our eyes adjusted to whichever element was attacking us, not least the impressive Parliament building and the imposing Lutheran Cathedral, which commands the Helsinki skyline. But the abiding memory of the city is of the city, not the buildings within it. It’s been said to me that as I love the cold, and I love Scandinavia, and this was my first trip to the region, the stars aligned to make me adore a place I may have simply liked if circumstances were different.

Be that as it may, something about this place beguiled me. I cannot recommend going there strongly enough. And if my ridiculous ramblings about this nonsensical place aren’t enough to convince you, one final Finnish joke surely will.

Why are there no Finns on the moon?
They went, but there was no wood.

« Flightless in Hong Kong | The Dogs of Ilulissat »