“The FAS4EST tit in the West” 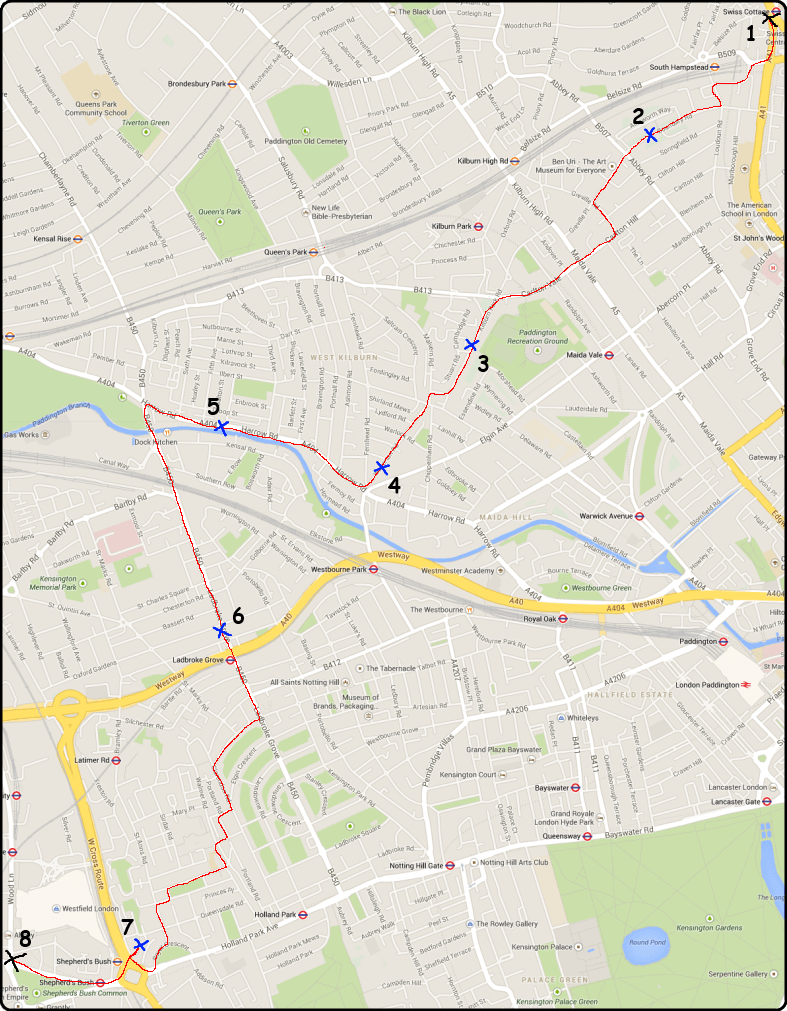 Forever gasping for alternative walking routes to help stride myself thinner, I often find myself gazing at online maps wondering what ludicrous part of suburban London I can get an extravagantly numbered bus to, in order to walk a route I’ve never travelled to a place I’ve never wanted to go.

So it is I find myself within such a vehicle heading for Swiss Cottage, where I plan to walk in a nominally south-west direction towards Shepherds Bush, where two bands, three pubs and an argument await me.

The bus ride itself offers signs of unpredictable events to come. A man with comedic Jewish-American-stereotype hair strides towards Golders Green, an angry Steven Wright impersonator in search of a punchline I have no time to provide as my number 82 shoots by. A CD sits in a bush by some traffic lights and it takes all of two seconds’ mild resistance to stop myself getting out of the bus and recovering it to find out what could have proven such a hideous listen to have been ejected into greenery by the Finchley Road. You and I both know it was some catastrophe by The Killers.

I hop off beside the creaking Swiss pub, in which I spent a handful of evenings during a month-long stint at a nearby publishing company forever ago. I have around two hours for this walk, which the internet tells me is plenty and my legs caution is never plenty enough, and it begins with a trundle down Hilgrove Road. I am immediately confronted by a man holding a screaming child like a guitar, and while no parent myself I can’t help think the child’s noise and situation may be related. It seems intent on forcing its forehead into the pavement so perhaps it was ultimately grateful its (presumed) father was more of a bassist with a longer strap as I wind past an estate or two and on towards Boundary Road.

Here I’m passed by an arsehole. It sits on a seat in some hateful silver sports car and is owned by a grey-haired man in full father-of-the-bride regalia, sporting a red carnation and a number plate reading ‘FAS4EST’. If the 4 is a T, the man’s a tit. I pleasure myself with the thought that it’s actually an F, and the car is a motorised advert for this year’s Feckless Auld Shite Festival. 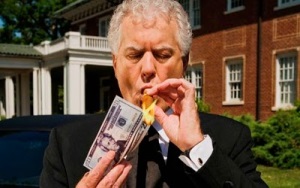 Boundary Road also includes some ageing old council properties that look battered but are probably now worth many a pony. It would be nice to think Londoners live in them but the rapacious capitalist nature of the blonde idiot in charge of this city would suggest otherwise. I stride in increasingly vexed fashion across a road famous for being on the front cover of a Beatles album, so I’m told. Never been a fan, conformist’s nightmare that I am, in my dreams.

As I continue along Boundary Road I pass a woman I’m almost certain I used to work with, and given her neck appears to be bolted into a thousand yard stare over my shoulder I can only assume she remembers me too. On Greville Road it occurs to me that this part of London is trying too hard, firstly with another misjudged number plate, reading ‘W100FY L’ – the mind boggles – and secondly with what seems to be a type of rectory, aiming for an Edwardian style despite having seemingly been built just last week.

Carlton Vale goes past in a blur before I’m pulled up by a remarkable sight on Kilburn Park Road. The sign that I’m moving into the less wealthy parts of Metroland appears in the form of a building which seems to have had a bite taken out of it – a partly destroyed tower block, with still a few satellite dishes left on the remaining two thirds of the building in a final V sign to the huge excavator sitting guilty nearby. Given the evil that appears to have been wreaked on this former home of hundreds, presumably to make way for ‘luxury apartments’, it’s a wonder ‘777 Demolition’ didn’t choose to knock 111 off when they branded their monstrous contraption. 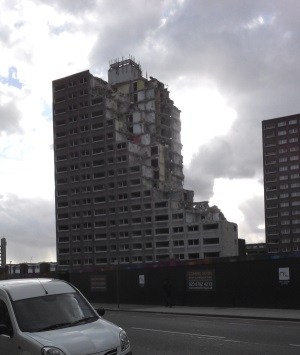 A pile of flowers by a railing on Walterton Road hint at dark times for one London family, and an incident a few yards further along the walk suggests this may be a generally unhappy part of town. An average-looking man is shoved hard for no apparent reason by an apprentice murderer, and looks genuinely terrified. The original victim then forgotten, the perpetrator strides in my direction. I cower in the slipstream of a man in a tracksuit who has evidently found a way to remain invulnerable or invisible to this angry cretin, who himself tries to grab at me but fails as I skilfully weave the other side of the useful Mr Motivator and scuttle off into the suddenly busy Harrow Road.

And it’s not much happier here. There are sullen humans as far the eye can see, entering betting shops full of hope and angrily exiting the same. A man in a motor scooter almost knocks down a woman who screams abuse back at him. The only light relief is offered by a handbag-sized dog jogging joyfully down the pavement, chased some thirty seconds later by two puffing pillocks without a lead between them.

In a slightly more sinister development, five minutes later the dog runs past again, this time in the opposite direction, pausing briefly to stare and convey some unknowable message at me before sprinting away towards the Grand Union Canal. Of its two former pursuers no sign can be seen. Being an adult I’m not a particularly avid fan of Doctor Who but I’m fairly sure there’s the makings of a story there should they run out of Cybermen for Malcolm Tucker to swear at.

Along the way W9 has become W10 and things begin to look less disturbing as I finally swap the grim Irish boozers of Kensal Town for Ladbroke Grove. For the first time I spy a pub worthy of a pit-stop, but for some inexplicable reason the owner of the Playhouse is locking up, at just before 5pm. As a result it’s the Eagle I end up in and the pint of cider I imbibe on this unpleasantly close early spring afternoon hits the spot like a school bully punching a briefcase carrier. With apple-ised vigour I continue pounding the streets of west London.

Before passing beneath the Westway I spy a man in full lycra-and-helmet attire, walking his bicycle with one hand and walking his can of Kronenbourg with the other. He drunkenly accosts a random stranger with advice I can’t hear as I head on beyond the tube station. I’m passed by three tramps crossing the road, plainly pissed and loving every single minute of their day together as they jangle and jape along their very merry way. It suddenly strikes me that this part of town does its drinking in mornings and early afternoons and that’s probably why that bloke was locking up his Playhouse.

I sense I need a little more west than south and split off into Blenheim Crescent. Back among the wealthy we go. Whoever the Earl of Zetland was – a man comfortable with the status of Holland Park, no doubt – even he would surely be disconsolate at the ruining of the pub named in his honour. I stride angrily down Princedale Road as my brain struggles with our city’s many hugely rich bastards unwilling to save neighbourhood pubs from, if not even development, simple desolation.

Being frightened by a set of horribly rich, seemingly detached houses on a road named St Anne’s Villas sets me into a jog towards the more insalubrious surroundings of ‘Shé Bu’ and a hitherto unmet pub named the Stewart Arms. A steady pint surrounded by only men in what a website tells me is not a gay pub makes for an odd end to the solo period of the day, as I wander across to the Defector’s Weld.

Where it is of course too busy to get served, so in The Green I am told by she who must not be named that I should be grateful there’s a family of 17 willing to take me to a glittering palace of dreams such as the Center Parcs Horrordome. The imminence of a weekend in purgatory hits me like I’m starting to wish that bloke on Walterton Road had done to grant me a weekend in the Whittington instead.

Map key
1. Striding begins at the Swiss Cottage pub
2. FUCKW1T
3. For once, a murdered building that wasn’t a pub
4. An encounter with a friendly local resident
5. One dog, two fools, much laughter
6. The happiest drunks in London
7. “Not that there’s anything wrong with that…”
8. ohsweetjesuspleasedontmakemegotocenterparcs

The soundtrack to this walk was Cheatahs by Cheatahs.