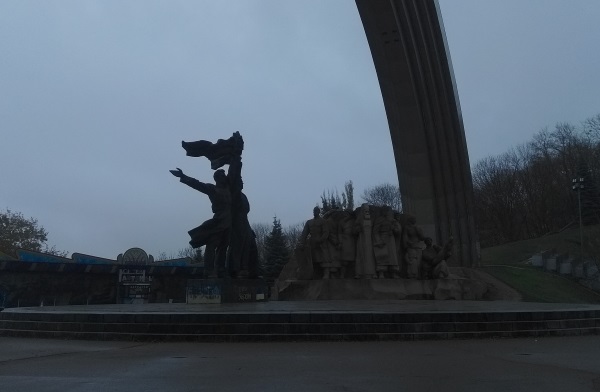 Four times I was asked what the hell I was doing in Kiev.

The woman demanding my passport at Boryspil airport switched her expression from stern authority to come again mate? when I said I was just visiting for a couple of days. The taxi driver gave it the full “But…why?” The fella in the hotel lift told me I should have gone to his home town of Lviv instead. And the barman said he wished he still lived in Kharkiv because Kiev is all a bit “Oh…I just don’t like it.”

It begins in an empty flat, echoing with the lonely sounds of an abandoned husband regurgitating the remains of a friend’s 40th birthday party. A week of this just won’t stand. Proving yet again how a man makes his very best decisions while still half-drunk, the next thing he knows he’s at Luton airport at 5.30am waiting for a Ryanair flight to Vilnius. The number of apologies I owe myself climbs steadily as the years roll by.

Ukraine International Airlines got me there and the cab to the Hotel Ukraina was the second most terrifying I’ve had, after a nad-shrivelling ride in Montevideo a few years back. He weaved about like Ali, with absolutely no lane respect, which would have made a great name for a 1950s film star pigeonholed in westerns.

Just as most of us were at the 100 Club to see the Pistols, so this driver told me he was in the Maidan for the revolution of three years ago. We drove along a road of monuments dedicated to the people killed in 2014 and only at this point did it occur to me I know little more about those nasty events than that it got a bit tasty and the president got kicked out. In fact, the Hotel Ukraina is directly next to the spot where 90-plus people were killed – many, incredibly, by snipers in the windows of other tall buildings nearby. Both sides in the conflict claim the snipers were the opposition’s doing. Some people were very likely shot from the upper floors of the Ukraina, given the trajectory of the bullet wounds. Three years on, I don’t much care who did it because they’re arseholes either way. Just imagine looking down a sniper rifle at a political protester and thinking “Yeah, I’ve got this.” Instytutska Street is lined with the grief caused by stupid men with guns and it’s a terrible thing to see. 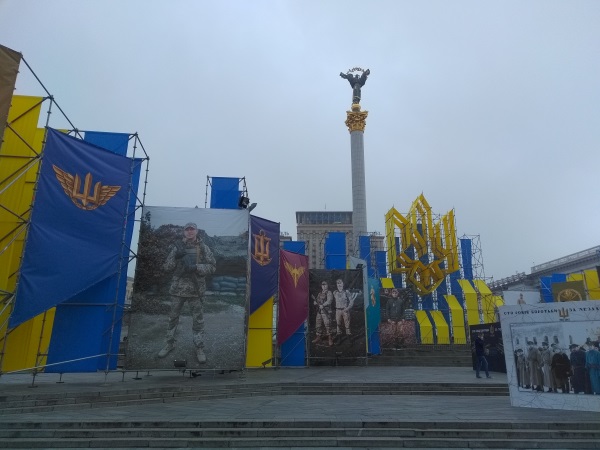 Exploration of the city began with enormous pictures of men in fatigues right in front of the Independence Monument – perhaps a show of strength in the face of ongoing Russian hostility in the east, though they may just be obsessed with their army given the number of them I saw strolling about all over Kiev. In front of these pictures were men carrying birds of prey, and a man-sized Minion, which I relay without comment because my mind went blank then and it’s gone blank now.

Kiev is a giant place. Everything seems imposing, from buildings that seem wider than they sensibly should be to monumental columns celebrating or commemorating this and that. What each building is, what the columns and statues are there for, remains hidden behind a wall of impenetrable Cyrillic. Thanks to a half-hearted attempt to learn Russian some time ago I can actually read Cyrillic, but if the word’s not a straight rip from English, like банк or футбол, and it’s not пиво, I’m no more use than we all imagine Danny Dyer to be. 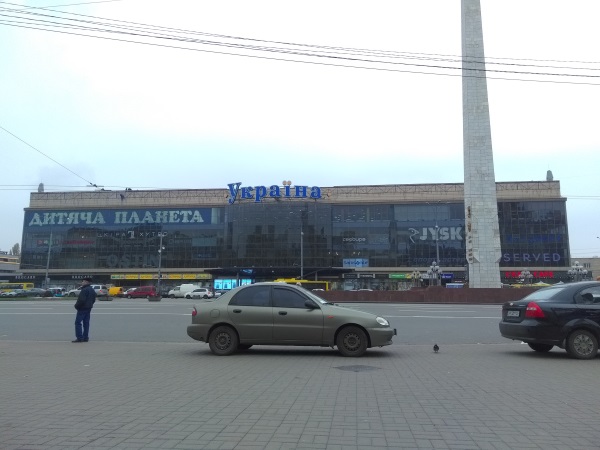 Roads are so wide that many require underpasses, usually filled with shops. A crone stopped me to ask something in Ukrainian, probably directions, and this proved not to be the last time I was met with an expression of irate bafflement as I blurted out “Don’t speak a bean of it love, sorry” or something similarly idiotic before striding onwards. My God do people in Kiev seem to need to talk to each other. They wouldn’t last a day in London.

I’d normally avoid enormous shopping centres like the plague but you take a desperately needed leak where you must. Further east the Olympic Stadium plays host to the national football team and also Dynamo Kiev, making it the scene of my team’s painful 1 point from 9 over three attritional contests back when Arsenal played teams you’ve heard of. 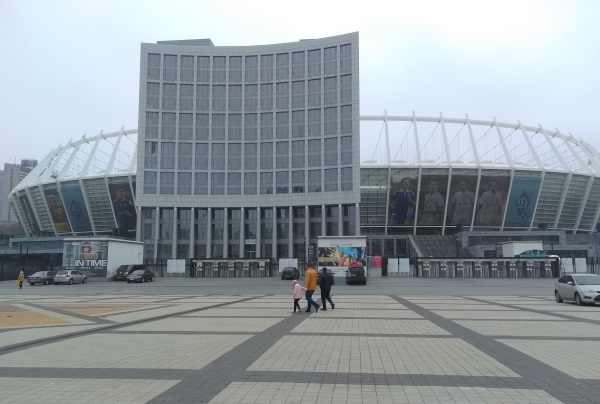 After a few hours of limping about a cheeky пиво doesn’t sound like a bad idea. I make no apologies for deciding the Golden Gate Pub would be my first stop, one of a number of Irish joints about the city that would spare me the horrified stare of a Ukrainian barmaid with no clue what I was on about. The Golden Gate itself is a reconstruction of part of the old city’s ancient walls. It looks like a treehouse. 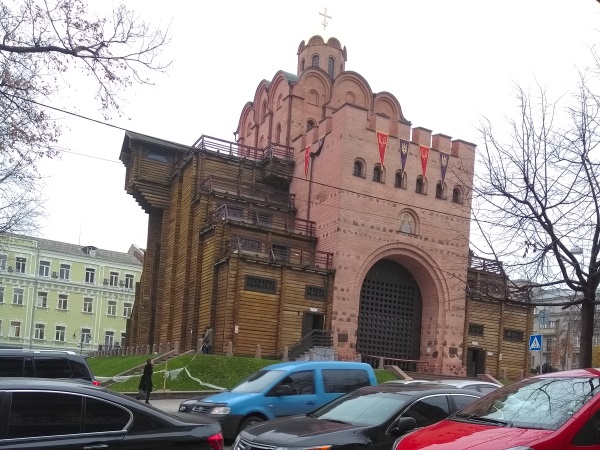 Fortified by a pair of golden gurgles I set off again but swiftly realised that, for some reason, I had a terrible thirst on. Porters Pub isn’t Irish but I was bold enough by that point to just aim a finger and hope the universal language of the drunk would see me through. Whatever the lad poured down me tasted like industrial waste, but at 90p a pint you can’t not have a couple can you?

Hang about there’s another Irish place around the corner, just past St Michael’s Golden-Domed Monastery, one of Kiev’s most famous of many, many massive churches, which I should probably stop for a proper look at but my oh my my throat is dry.

Chatting with the barman in O’Briens I found out I’d been mispronouncing the Ukrainian for ‘thanks’ since arriving (it’s DYA-koo-yoo, not dya-KOO-yoo). He explained his dislike of football and Kiev in general (but more jobs, innit), while we awaited the arrival of the evening’s star turn.

Here he is now. Hello Bernie. 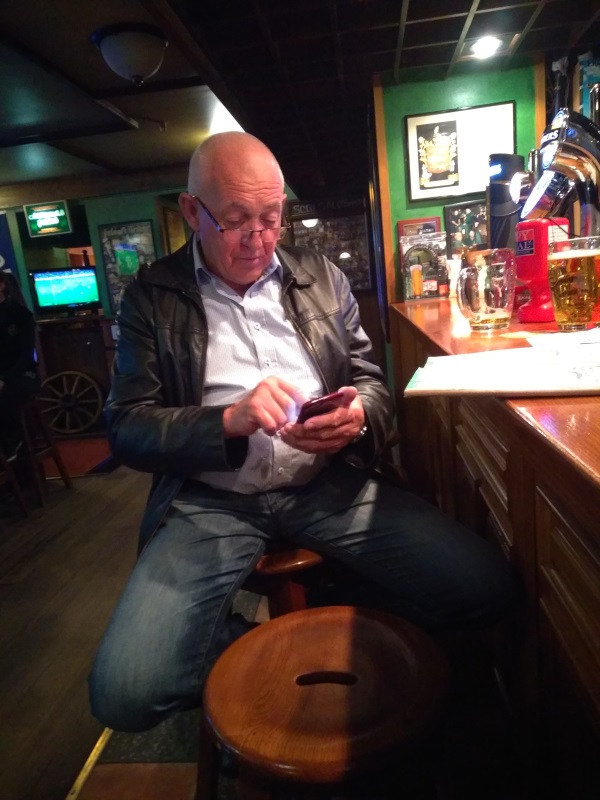 Fresh off a flight from Perth via somewhere in between Kiev and Perth, Bernie bemoaned that he’d been stood up by the lady he was expecting to welcome him at the airport. No matter though, he had a couple more on the go. He showed me the pictures. Models, every one.

Bernie explained that he’d been chatting online and texting a selection of incredibly attractive Ukrainian women who had begged him to come and visit. A single 62-year-old Australian does not turn down invitations like that, no matter how very clearly they were extended by balding Russian men wielding premium-rate phone numbers. “Listen Bernie, you’ve been had mate.” “Yeah probably. But you never know eh?”

Sometimes, Bernie, you know. His first potential conquest had texted him on his arrival to say that, in a horrible stroke of bad timing, she’d had to go into hospital and had no idea when she’d be out. Ten days he was staying in Kiev, fully expecting to penetrate one or more of these suspiciously stunning ladies. He could have walked out of O’Briens and within five minutes found a legitimate shag costing him half the bill he’d rack up in another night of these texts. But no, he’d pledged himself to these non-existent girls on his phone.

As he begged me to stay for what would have been my ninth pint of the evening we agreed that if it fit with plans we’d meet back at the same spot at 6pm the following night. Given all I subsequently ate was some kind of kebab-panini hybrid involving suspicious sauces and, disgracefully, sweetcorn, there was never any chance the hangover would let me see Bernie ever, ever again. I assume he’s still sitting somewhere in Kiev looking wistfully at his phone with a cock so clean you could do your makeup in it.

Yes, obviously the next day I felt like holy hell after too many lagers with names like Lvivski. The biggest problem was a criminal lack of foresight leading to no drinking water during the night – the tap water in Ukraine will by all accounts ruin your toilet experience for a number of days.

But eventually I forced myself out into another foggy day. I found the Arch of Diversity, a giant half moon of steel dedicated to the unification of Russia and Ukraine within the Soviet Union. Given current affairs, they’re thinking of tearing it down and replacing it with another Maidan monument. The view over the Dnieper River is likely impressive but the weather was closing in and my eyes were a little heavy for some reason. Oh shut up, it’s still better than sitting in Finchley trying to get Barnet promoted. 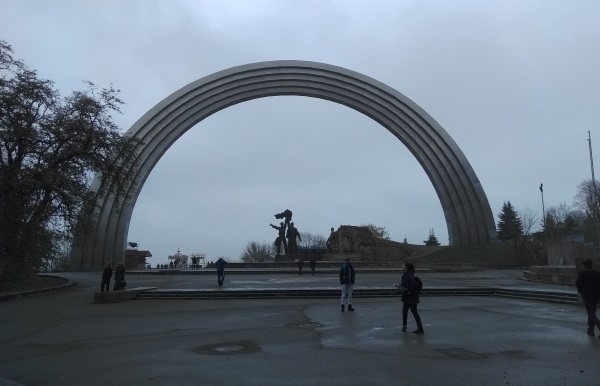 My own tragic version of trainspotting is I like to see the Parliament of wherever I’m at, so I expended my final reserves of strength walking up Mykhaila Hrushevskoho Street to the Verkhovna Rada. Trouble is a protest camp is currently set up there accompanied by men in uniform conveying thou-shalt-not-pass with grim facial expressions alone. These protesters have been in place for some weeks, against the slow pace of anti-corruption measures by the new government. We can only hope the people of Kiev have seen enough to stop any repeat of the Maidan. It feels like there’s little appetite for destruction, and there are currently no more than a few hundred as compared to 2014’s 250,000 demonstrators, but escalation is a bitch.

That was me done, via a 7-11 and a massive bag of crisps with a shrimp on the front that tasted faintly of beef; crisps epitomising a cuisine that’s a bit confused. Yeah you’ll be getting meat and potatoes mate, but not without almost-mustard sauce, gigantic baked beans, cheese of sheep, and beetroot, always bloody beetroot. The cab driver on the way back to the airport had some appalling easy listening film score covers album on the go. It was to the strains, and I mean strains, of The Godfather that I glimpsed the huge monument known as Mother Motherland one final time, its head in the clouds like poor old Bernie.

Whether I liked Kiev or not I don’t think I’ll be able to work out for quite a while. Those 90p pints suggest it might be an ideal city for a lads’ weekend where one ends up arrested, another ends up in the Dnieper and the rest come back scratching themselves. But the innate shiftiness of the men in this part of the world in the eyes of a solitary Brit – yeah it’s all in the mind and I’m sure they have views about us too – make it a tricky place to warm to, especially when few of the locals can fathom why you’d want to be there.

Still, I’m certainly happy I’ve seen this legendary old place, which never seems to be far from epic events. Kiev is like the loner standing in the corner of the school disco, dressed all in black – she wants attention, but when she gets it she doesn’t understand why. She looked at me skeptically for the whole song, but I’m glad I asked for a dance.