“Have I failed you, grandmother?” 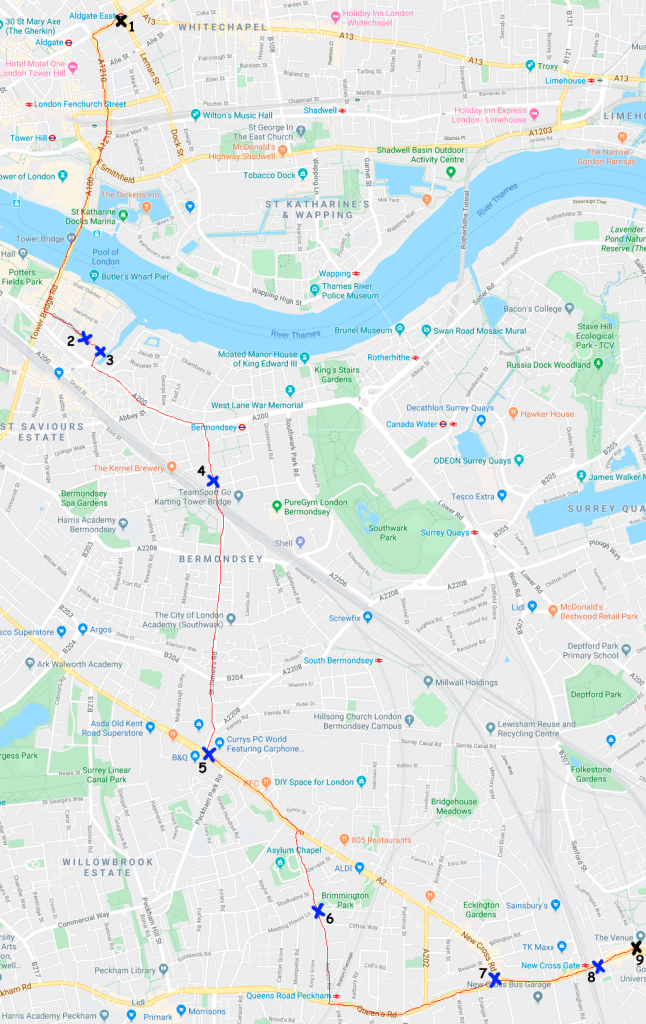 In fact, I was only partly right.

As my previous amble so adroitly relays, there was a minor health issue to attend to. London hasn’t killed me, yet, though recent months have been Rich and Strange, and for many of them I have been balder than Hitch himself. But a series of splendid medical professionals have ensured that for the time being I can renew my fear of a Brexit-induced Head and Shoulders shortage.

No more for me the flowing locks, however; I’m now told I look like a football hooligan. So, in possession of a ticket to an evening of music in the ominous environs of New Cross, it seems only right to embark on a walk through Millwall country.

Yes, to the south once more. My relationship with south London remains so distant and strained that on a recent pub crawl with my brother we forsook the entirety of the city’s undercarriage in favour of White City. Imagine the emotions that would make someone go voluntarily to White City. But vast swathes of London remain unexplored to me, and where there are unwalked streets there must be unmet bar staff. I know this because Deserter tells me so.

Fat rain baptises my enormous slap as I amble across Tower Bridge. I’m not 50 yards beyond the river when I realise I can’t remember if it’s first or second left I want. Taking a punt on Queen Elizabeth Street I find a statue of a horse my memory stored as Pablo or Pedro, though that might be Duolingo’s fault. This is in fact Jacob the dray horse. I’m sure his story is fascinating. 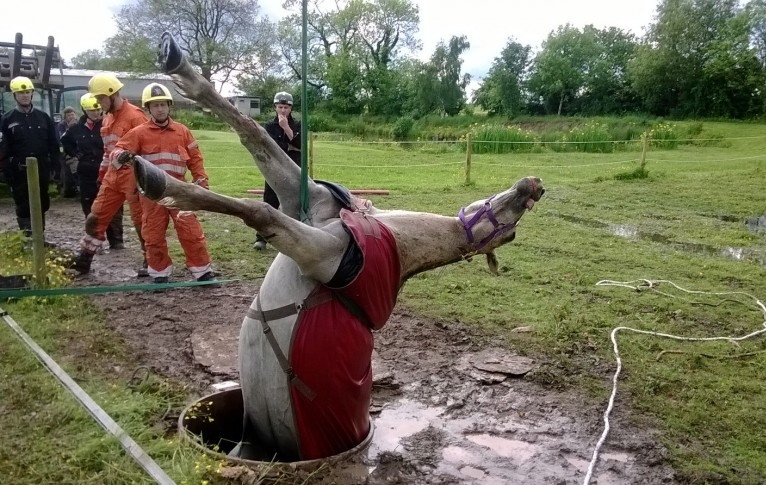 The word CHRISTIANS in enormous letters at the end of the street has my head whipping left and right in terror, but none emerge. Left onto Jamaica Road. I’ve not yet put contact lenses in and a side road deserves an extra double-take: Dockhead.

For anyone who doesn’t believe in coincidences, I offer up this irrefutable evidence: last week, busy as a bee in the office, I watched Jamaica Inn for the first time, and now, on Jamaica Road, I quite fancy a pint. There’s no inn in the immediate vicinity but I’m delighted to see south London’s priorities in order – pubs on their road signs.

Increasingly parched I eventually hit upon an enormous and extremely inviting building with the words The Gregorian up itself. The domestication of dogs remains humanity’s finest achievement and there’s a splendid example of its benefits sitting beneath the bar, licking a puddle of what I hope is beer. I sit in the corner watching the wildlife, wondering if they use dogs in place of cleaners down here. Nothing would surprise me about south London, though a pug tarted up like a French maid might come close.

I am blind as an old mole, so with my newfound what’s-the-worst-that-can-happen derring-do I sit in the pub and drive home a pair of contact lenses with no mirror. The dog regards me balefully. Yes, hound, my recklessness knows no bounds and I’ll probably end up in the river.

St James’s Road seems to have modelled itself on the mundanity of New Barnet but I’m soon upon the St James of Bermondsey pub, and why not eh? The windows and walls extol the virtues of ‘craft beer’ and as a man with as much interest in that as in the contents of the various Tates I proudly order a pint of Guinness that is duly served with a look of fierce antipathy. Little does the barman of St James of Bermondsey know that I virtually own this place, being as I am ‘Of Bermondsey’ myself.

A bold claim for a man of the north and occasionally west, but it’s all true. The perils of the boom in genealogy is that you often find your family’s history in unlikely and perhaps unwelcome places. It turns out my grandmother’s ancestors were almost uniformly from Bermondsey, with offshoots in Bromley-nowhere-near-Bow. I hereby claim my eel, and so forth. 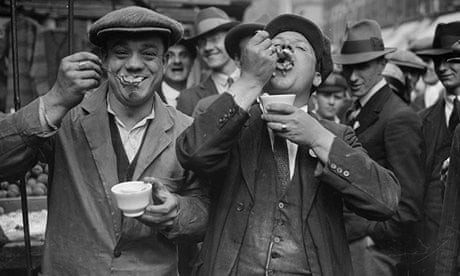 Sidestepping a Kieron Dyer lookalike I continue south. A garage door has been painted with the words ‘When Elvis Met Tommy In Bermondsey’, an event of dubious historicity. I approach a Co-op undertaker’s and hear a scream from a nearby estate. An ambulance immediately begins to wail as I wonder what the hell I’m doing walking through a decidedly random part of south London alone on a darkening Friday evening. Perhaps the patience of immortality is being tested a little too keenly.

The area begins to resemble one of those grim industrial parts of town out west, like Park Royal. Anaemic ‘new builds’ dominate, though there are still a few allotments holding firm on the corner of Lynton Road, as well as a house with a small lawn clearly made of astroturf. What use is 15 square metres of astroturf? Surely you couldn’t even bury a body.

The area remains depressingly blank until I reach a road named after two fine gentlemen of my acquaintance. On the corner of Catlin Street sits what looks like a disused scout hut now doubling up as a cat shelter. At any rate there are at least five cats scouting the building and I’m onwards quickly lest my solid belief in dogs as champions is rocked by a persuasive feline menace.

To be clear, both go by Catlin. Neither go by Street, unless turfed off a bus after one too many fizzy drinks.

This now appears to be Old Kent Road. We must of course call it ‘the’ Old Kent Road for reasons related to Monopoly and I can confirm I had no idea this is where the brown thoroughfare lay. I can also confirm I would happily pay £60 provided it comes with the full contents of that PC World over there. 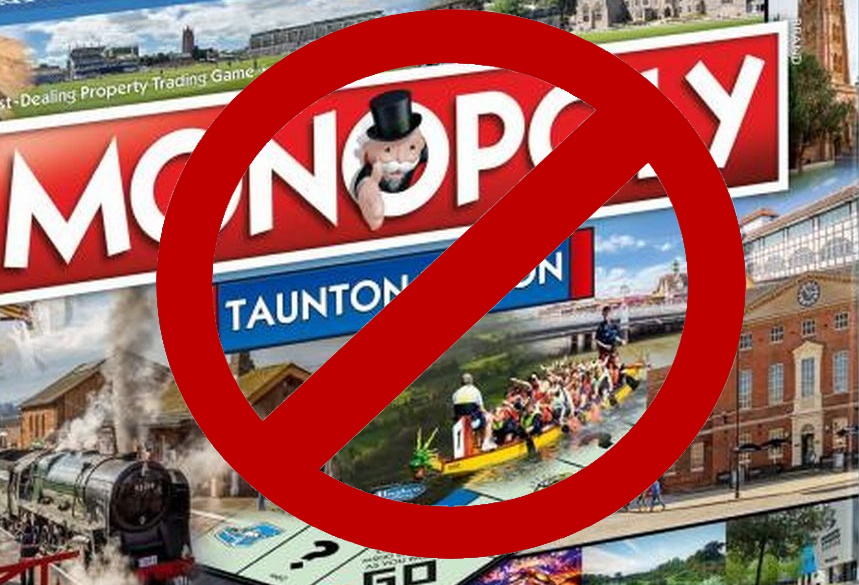 A woman in Muslim headwear peers at me fearfully as I saunter by. It occurs: to her, I must look like ‘one of them’. To her I could be one of those people who voted you-know-what and wants them to all you-know-what and why-don’t-you and all the rest of it. I’m not sure she’d appreciate the conversation where I explain this look is one of circumstance. Little does she know I’d be much, much more inclined to flash my reassuring Arsenal season ticket at her than at any of the patrons of the pub I’m about to enter.

I realise I’m making overly swift progress to New Cross, so reverse a few yards and bend off on Asylum Road towards a light in the distance that can only be a welcoming public house. In fact, the Asylum Tavern is almost exactly how I pictured all south London pubs to be before I actually went in a few and realised oh, bugger, they’re decent. Millwall flags and hairless men of a suspicious bent, eyeing a solo drinker gravely, wondering if he’s Palace.

How easy it would have been for me to be one of these. I’m very not indeed. Have I failed you, grandmother? Should I even now be punching something that has wronged my land, my people, my way of life? Must that something be brown?

I sink my pint with as much acerbity as I can muster and make haste to what appears to be Peckham. Past the Montague Arms, which looks dead, which is depressing as I once came in here for reasons long lost and earned a fine selection of Bowie and the Kinks about the ear. If even the south lets its finest pubs lay fallow, what is to become of this once great city? I don’t even pretend to know what a barista is, but I know he’s to be distrusted.

It takes a little longer than expected before my next appointment is upon me and by the time I’ve realised this ghastly pub is called the White Hart – it surprises me they allow such an outrage in Millwalland – I’m already halfway to the urinal. Naturally this is another drinker of the fancy ilk. Nothing written on the taps; presumably a single piece of paper somewhere in this pub explains that Unyielding Beaver Milk Stout is 4.4% ABV and £7.50 WTF. I order a Guinness simply for the pained expression of the type of barman who wears hats indoors. But who’s laughing as I end up sipping ‘whatever stout you’ve got then’? Whichever drayman wrung this swill from the cellar floor, I imagine. 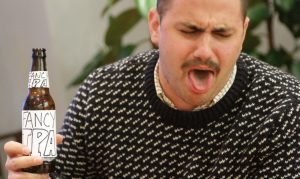 I go the wrong way out of the pub and end up at a bus station. There’s a reason that bus station stuck in my mind but it was washed from that mind by subsequent events in The Rose. I sit alone, contemplating. A woman sits next to me and strikes up a conversation. She asks if I’m waiting for someone. No, just killing time, I reply. This ends the conversation with the finality of a slap across the maw. I am some kind of lunatic, drinking alone. She actually turns her back on me.

And finally on to the venue where I congratulate myself for having pre-booked a ticket to a 350-capacity venue containing approximately 15 punters, most of whom look irked by the interjection of live music.

I have survived south London once again. For now, I have survived all of London and its deadly particles, murderous bridges and continued attempts to price and shutter me out of malted jubilation. Who knows what’s in store, how many more walks there’ll be? If a man falls over in a city and nobody reads it, has he fallen over at all?

Maybe I will be back to claim Bermondsey for my tribe. Probably during the cricket season though.

The soundtrack to this walk was Born A Cynic by Weatherstate.