“I like Dancing On Ice as much as the next man (not much), but…” 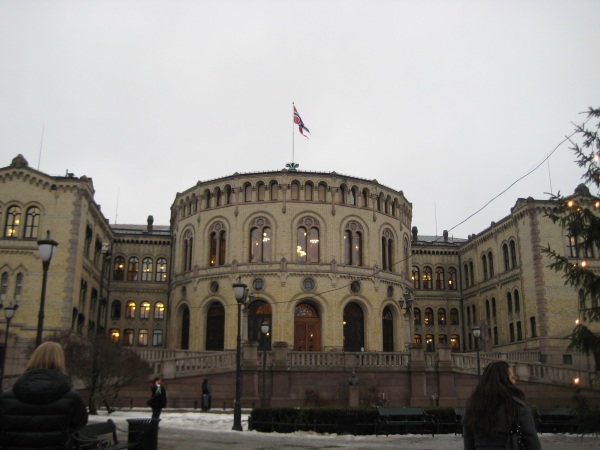 It’s funny how your impression of a city can be clouded by the tiniest of things. In the case of Oslo, it was footwear.

I love Scandinavia more than any other part of the world, especially in winter. I may indeed decamp there one day, when Britain elects Peter Hitchens as Prime Minister, leaves the EU and civilisation generally, and I get sick of people calling me a freak because I’m far happier in colder weather than when the angry fireball in the sky is searing the very skin from my bones.

Norway was the last Scandinavian country we visited, in the larger definition that includes Iceland and Denmark. In my desire to visit capital cities of countries wherever possible, Oslo was booked for mid-December 2012 and off we went in search of snow.

I love snow. There was a period in my life, during my early twenties, when I inexplicably became cynical about snow and decided it wasn’t cool any more (ho ho). I’ve thankfully now recovered my lost innocence and just weeks ago successfully winded myself in Finchley by falling flat on my stomach trying to make a snow angel.

So I wanted snow. What we got was ice. Lots and lots of ice. Everywhere.

On every pavement, in every sloped entrance or exit, in parks (ice on grass, which I didn’t know physics allowed). At one point I got up for a leak in the night and could have sworn the bathroom floor was a bit dicey.

Naturally where there’s snow there’s ice, so I’d packed my most sensible shoes with what looked like a grip suitable for all but the toughest Antarctic terrain. Sadly these proved about as effective as a cardboard golf club and I spent three days sliding about like Christopher Dean, while the wife strode purposefully off into the distance in her boots, which didn’t look like they had much more grip on them than what I was flailing about in.

And the constant irritation of knowing the next step could be my last movement in a vertical position for a while has made my memory of Oslo one of annoyance and fear. The city itself is pleasant enough, the dour, winter Scandinavian greyness exactly what usually appeals to me, but it felt lacking in a certain buzz you often get from places like this.

The Royal Palace overlooks the centre of the city but doesn’t have the gravitas of, say, the equivalent in Stockholm, and it can’t be good for a city when you can walk past its Parliament building without even noticing it’s there. (Admittedly this may have been because I was gawping at the world’s fattest seagull, sitting in the middle of the road goading traffic, just outside the Stortinget.)

The two stand-out features of the city, apart from its bowl-like geography surrounded by tree-covered hills, are the Akershus Fortress and Frogner Park. The fortress remains military property but you’re unlikely to be drafted these days as it is principally used for official occasions and dinners, and as a home for a handful of small museums within its walls. We visited the Norwegian Resistance Museum, which contained an excellent summary of Norwegian activities during the Second World War, although half the exhibits were in Norwegian only which is a bit cheeky if you ask me, did no-one mention I was coming?

Frogner Park meanwhile is a 20-minute walk north-west of the centre of the city, and was by far my favourite thing about Oslo. In wintry conditions it is bleak and forbidding, with a winding river/lake marshalled by a solitary fowl, moodily pecking away at the ice in vain. Elsewhere a group of ducks sat shivering miserably on yet more ice by a waterfall – amusing to see, but also a pointer to the character of the park during spring and summer, when its natural, colourful beauty could bring good cheer to even the grumpiest mallard.

The park is also home to a set of statues created by Gustav Vigeland, all of individuals in the buff for some reason, and with a centrepiece of a rather disturbing column of intertwined naked humanity that looked not unlike a crematorium chimney made of people. The finest statue though was of a man, naked of course, furiously attempting to free himself from a quartet of children who had somehow become attached to him. One of these children looks like it’s being punted up the football field by this poor chap, who evidently regrets putting that babysitting ad in the Aftenposten. 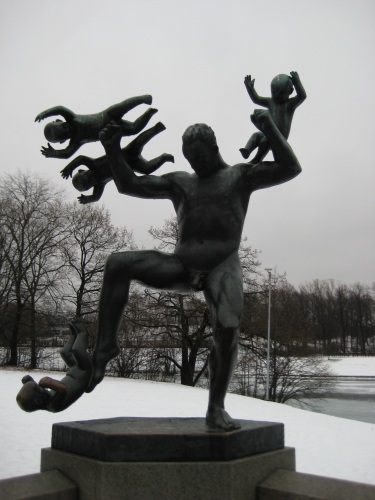 Another interesting Oslo sight was a man driving a BMW slowly down a recently tarmaced road with one wheel entirely minus its tyre, sparks being ground out as he waved goodbye to hundreds of krone with every agonising metre covered. He looked calm enough, which meant he was Norwegian – not because they are a placid race, but because had he not been he would know that even a replacement windscreen wiper would likely set him back two or three mortgages.

Because Norway is, by a country mile, the most expensive place I have experienced. Yes, Scandinavia is expensive, everyone knows that, this brand of socialism doesn’t come cheap. We’ve been to Sweden, and that’s also expensive, we know what to expect.

But Norway takes it to a whole new break-the-bank level. British people on holiday tend to measure how expensive a place is by how much a pint of beer costs. In London as I write this you’re looking at an average of £4 a pint. In Oslo, it was around £12. They must have seen me coming. I can only assume that the price of living in Oslo is lower for citizens; perhaps rent is cheap, or wages particularly high, because the taxes are so outlandish that any other arrangement would surely create an exodus of Dunkirk proportions.

It’s hard to recommend Oslo as a destination, in truth. There are pleasant aspects to the city, but there are far better places to see in this part of the world – even in Norway itself, as our trip took us on to Bergen via a superb rail journey across the snowy mountains, and Bergen was a lovely place (to be covered another time).

And thus Oslo becomes only the second city in Greater Scandinavia that I struggled with (Copenhagen be damned). I curse the ice that made this so, because without it I reckon I’d have given it a fairer shake.

(All the same: give me snowy Oslo over, well, any beach, and I’m yours.)